Welcome to your weekly MLS attendance stats fix. Took me a couple of days to compile info while I was distracted by national teams, etc. More on the USA loss at Wembley later. As accustomed, I'm including a bonus plot in high-def below that shows the Eastern Conference attendance statistics for each venue. Note that by "week" I mean each time a game is played in a particular venue. TFC wins in this round with a consistently sold out BMO Field as I've stated on several occasions. They are definitely my favorite team to root for when at home. They also tend to bring along a healthy contingent to away matches as was visible in both DC and Columbus on previous matches. DC, with their fervent fans and well-adorned history, is a close second when it comes to attendance both in general and relative terms. They have an average of 77% stadium attendance. This plot shows a little up and down related to Saturday vs Thursday games and a sellout crowd against RSL in late April. Sadly, one of their primetime matches against impressive Columbus drew only around 13K.
The New York Red Bulls have not done well at all if compared to DC and TFC. Some of their games drew 12K or less. This is a sobering sight since they are supposed to be getting a state-of-the-art, 25,000 seat stadium. NY crowds are fickle, however. They tend to draw when big names are out like Beckham and international friendlies as well as club friendlies with premier teams from Europe. Admittedly, the fan base is there, they just need to find a way to coax them into watching a side that already boasts the best attacking tandem in the league with Juan Pablo Angel and Jozy Altidore.
The Columbus Crew is another side that perplexes me. They show up in healthy numbers for some matches, as was the case with the Houston and New England games but not as much on opening day or against KC and Chivas. The recent and unfortunate turn of events cataloged by MLSR and Steve Goff, where some of the unpleasant seeds of hooliganism and racism have shown their ugly face. Racism has no place on the field. I at one point stated that I liked the streamers in TFC and other crowds. I'm beginning to rethink that to maybe that it should be done before the game or during the half or something. As beautiful as it is to see all the flair that soccer can have, I do not want to see players injured by bottles, cans, or flares and even less by the insulting bananas thrown at New England's Dube. Plenty of other websites have chronicled this turn of events so I will not dwell on it here.
Chicago, like TFC has enjoyed a regular crowd that does not fill stadiums to the brim but certainly don't leave it empty. Chicagoans have had to endure the fickle weather of the city and still have made it out to the games. 80% average.
Kansas City has a much smaller venue now at the Community America Ballpark. They gather the usual crowds that now, relatively speaking, do fill up the stadium.
Last, and saddest of all, is New England. MLS Cup runner's up on several occasions may have cost the Revs their fan base. The team has yet to break the 14,000 mark this year and is level with Columbus at 54% average attendance.
Enjoy the new figures. As always, all statistics are based on public MLS numbers and all plots are on the right column. 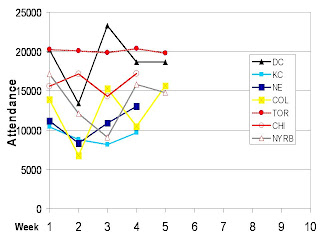