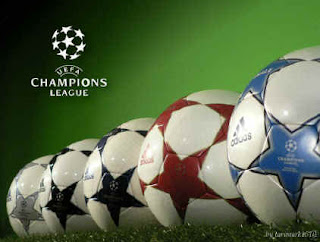 And then there were two. Two English teams, that is. The Champions League, undeniably the most coveted prize in all of Club Football (Club World Championship doesn't quite count just yet) will be fought out by the two highest placed teams in the English Premier League. So who's to deny that it is the best and most important league in the world? Down are the other giant leagues... No more Barcelonas nor Romas nor Bayern Munichs. It is important to note that among the final four stood Liverpool, Chelsea, and Man U. Arsenal was swept aside by none other than Liverpool in the quarter finals, hence their absence from the top four. And where is the English national team? Not in the Euros. Not this time. Not even when its club teams are the most important and most lucrative in the world. Blatter may squabble around alongside Platini to make national leagues more inclusive of its own country's players. Platini wants only actual champions in the Champions League. That's never going to fly. Not when so much money's at stake for the biggest teams in the world. So what? Let's enjoy the game. Here in the States most of us soccer fans wind up watching a lot of EPL games thanks to FSC, more so than any other league including the MLS (Mexico's league doesn't count here since it excludes non-Spanish speakers). So let's have a party with the teams Americans know best. It may not be Barcelona or Real Madrid to play against the world famous Manchester United. Instead we have the much-hated-by-true-EPL-fans team... Chelsea. To quote a prominent (humorously, that is) american football commentator: Two teams, both with head coaches, playing the game of football. This should prove to be a great game.
Posted by R. Mera Velásquez at 6:52 PM

I have been enjoying the Champion league games. As far as English national success vs. club glory, the fact is that most of the top clubs in the Premier League are made up of a lot more foreigners than Brits. Even Germans like Ballack and Spaniards like Shabby Alonso (this is how I choose to spell his x-ridden name) have moved to England for the better play and perhaps pay, something that was not done a lot in the past (might be interesting to hear how the shift to the Euro has affected the football leagues throughout Europe and if England retaining the pound is of consequence).

Same goes for the Spaniards. Huge underachievers in the national scale (couldn't even win it in their home turn in '82!). Meanwhile Barcelona and Co. are riding high with the Ronaldinhos, Messis, and Robinhos.

I doubt very much that more people in the US watch EPL than MLS in a given week, and as for MFL--it's the most popular league in the USA by far. Spanish-speaking fans still count.

I'm a Spanish speaking fan and I definitely count. This was about a larger view of the game in the nation.