As promised. I've compiled my own analysis of the all important MLS attendance. I've been frustrated by the apparent lack of in-depth attendance figures for the league for those of us that wish for MLS to expand and gain more recognition. In other blogs I've seen plenty of numbers but not enough plots. Plots are an easier/prettier way to gauge numbers. I took it upon myself to devise different methods to analyze MLS attendance in relative terms. All figures were computed using public, official MLS attendance numbers. Note that these are cumulative numbers in the bar plots and pie plots (if provided). Individual team stats will be provided per week for all teams in line graphs as well as the effect of Beckham, Blanco, and the rest of the DP crew. I'll post those next month when more data is available. 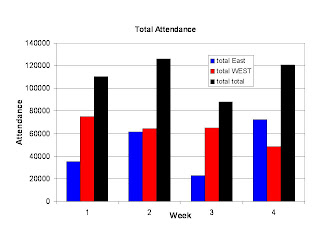