Old Firm in the USA 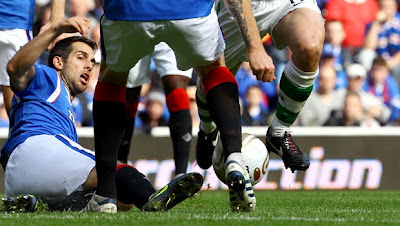 Yesterday we were treated to a rare event: The Old Firm match between the two Scottish superclubs Rangers and Celtic. What a game and what an atmosphere. And it's great to finally be able to see matches like these in the US, especially considering that Rangers has three American players in their squad. They are indeed the American Glasgow Rangers.

The match took place with all the flair that comes along with a true derby. Raw emotions, interesting undercurrents with Rangers' financial woes, a title on the line for Celtic, and plenty of goals, fouls and red cards. Aluko's opening goal was particularly impressive with his cutting move and quick finish. Wallace's game-winner was a vintage 2-man advantage type goal and one worth celebrating.

As far as our American legion playing for Rangers, Bocanegra was impressive until the point he was sent off for a foul in the penalty area. Captain America still has it, however, winning balls left and right and taking part in the attack when summoned by inspiration and reflex. Maurice Edu had a quiet yet constant game. He settled the midfield and provided some key passes. It's clear that both of these players should remain top options for Klinsmann's national team. Unfortunately, Alejandro Bedoya didn't make it onto the pitch, although he was on the bench for Rangers.

Perhaps the most important part of this game for the US fans was the very fact that it was on TV. Suddenly, a couple of days before the match there were advertisements for it and we were quick to set up the DVR. It's also a part of a very encouraging trend in soccer coverage in the United States. From MLS getting a contract with the newly formed NBC Sports to the expanded coverage of the UEFA Champions League on the various FOX networks, more and more futbol can be watched on television. Add to this the recent purchase by FOX of the World Cup rights for 2018 and 2022 and suddenly it's not just ESPN with soccer.

At any point during the week, anyone with expanded cable or satellite coverage is treated to soccer from around the world. Even basic cable and regular television in areas with Spanish network or Fox itself will showcase MLS, Mexican Primera and English Premier League matches.

So yes, thank you to the Old Firm for a great match. And thank you FOX for this treat. To all the TV soccer networks: please keep it coming.
Posted by R. Mera Velásquez at 2:52 AM