Loss of a generation: US U-23 out of the Olympics 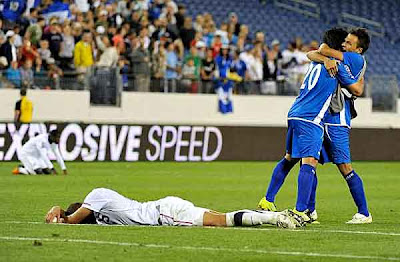 If there were words for tonight's last match for the US team in Olympic qualifying it would definitely be disbelief. How could such a talented team not even make it out of the group stage after losing to Canada and surrendering a lead at the last second to El Salvador? Was the team really not that good? Had the team peaked too early? Was Caleb Porter too young to be the coach? Would Agudelo have made a difference? The answer is, probably, all of the above.

Although it was a dream start in the first minute with a sublime strike by Borussia Dortmund forward Terrence Boyd, the Salvadorans pressed and got two goals in quick succession against an ailing Bill Hamid. The US did come back from 1-2 down thanks to great goals from Boyd and Corona. Unfortunately, a lack of concentration in the final seconds allowed for a sublime shot from the Salvadoran player that went past Sean Johnson and qualified the Salvadorans to the semifinals. And yes, there should have been a clear penalty in the USA's favor that could have sent the score to 4-2 and may have won the game for the Americans.

The sad truth after today is the loss of a generation of players. Agudelo, Diskerud, Shea, Corona, Boyd and Gyau, arguably the best of the bunch, will not see the light of the Olympics to catapult them further in their careers. Gone is also perhaps the last chance for Freddy Adu to finally silence his critics with a stellar international tournament. No, not fair at all.

What does this mean for US Soccer? A major setback for sure. Not only did the U-20s miss the last World Cup of that division, but now the older U-23s will also lose the opportunity to compete against top international teams.

The frustration behind this sore loss for US Soccer reverberates all the way to the top. Porter was clearly Klinsmann's choice for this group of players. The full national team is seeing a revival of late, however, with impressive wins at Slovenia and Italy. But what happens when Dempsey and Donovan aren't around? Do Shea, Corona and Agudelo make up for it? How does missing the Olympics prepare them for the future?

There are some interesting facts after today's loss: 1.) Concacaf competition is getting increasingly better, 2.) Terrence Boyd and Joe Corona had breakthrough performances, 3.) Mexico did not qualify for Olympics 2008.
Posted by R. Mera Velásquez at 1:45 AM