MLS struggles in the Champions League 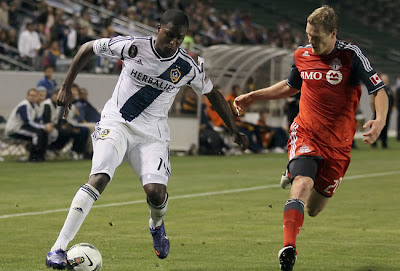 When Toronto, LA Galaxy and the Seattle Sounders completed their group phase with passage to the Concacaf Champions League quarterfinals, there was hope in the air that perhaps this year might be the year MLS wins the tournament. Santos Laguna quickly brought Seattle down to earth with a pummeling of 6-1. And as for the all-MLS tilt, Toronto going through may not be optimal as a candidate.

For all of Seattle's considerable prowess at home, their away form still lags far behind. And although Sigi Shmid made a few moves this winter it wasn't quite enough to bring the Sounders up to a higher level of competitiveness. Indeed, Seattle's defensive end requires further development either in tactics or personnel. But this is MLS, and there are limits.

The case for LA is a bit more complicated. Clearly the best MLS team in 2011, this season they are hardly convincing. Arena kept his player spine intact with Beckham, Keane, Donovan, and Juninho all returning. But the loss of their anchor, Omar Gonzales, may be catching up to them. Then again, it could also be the fact that only 7500 people were allowed to attend this match. Would matters have been different with all 27,000 in attendance?

Where does Toronto FC fall in all of this? Will it be the MLS game changer? Historically, Toronto has been one of the weakest teams in the league. But perhaps this season they have something better to offer. With Torsten Frings and Danny Koevermars in their second season from the start, the additions of Silva and Johnson, as well as the presence of Plata and De Guzman, Toronto could be peaking at the right time. But would they be able to beat teams like Monterrey and Santos?

There is another variable in the MLS Champions League equation: the length and timing of the season. While most MLS clubs end their season at the end of October and do not restart until mid-March, Mexican and Central American leagues are still in action. They have their winter breaks, yes, but not for 5 months.

It is now in the hands of Toronto FC to carry the MLS torch into the depths of the Champions League. Aaron Winter will need to come up with defensive answers swiftly if his team is to weather and outlast Santos Laguna's considerable offensive power. MLS has made some steady progress in this competition but there is still plenty of room for improvement.