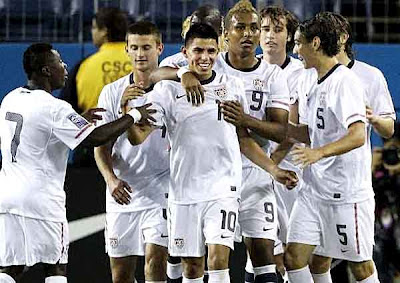 The Olympic qualifiers are underway and the US U-23 crew has started off on the right foot with a resounding 6-0 victory over Cuba. Granted, this is Cuba and the island nation's defender was ejected in the 19th minute. Still, plenty of offensive firepower, control of the ball and great skills were displayed.

The Olympic squad as an U-23 team is the last step in player development for national teams. Last time around we were treated to Stuart Holden, Sacha Kljestan, Maurice Edu and Charlie Davies. Advancing to the finals of the Concacaf tournament means passage to the summer Olympics in London. Once there all bets are off for Caleb Porter's crew.

Caleb Porter is an up-and-coming collegiate coach that took Akron to its first ever win in a sports tournament for any discipline. He was offered the DC United post but declined it in favor of continuing with Akron. He has described himself as a possession-oriented, attack-minded strategist. A great column on this coach is available here.

The players to watch in this tournament are as exciting as last time around. In fact, most of these players already take part in MLS squads, Mexican Primera and Europe. Some, like Mixx Diskerud, are highly regarded by most in the soccer media. Also in the mix is Joe Gyau of Hoffenheim, who has shown promise for the Bundesliga team and will likely take part in league games sometime soon.

A secret weapon on this team is Joe Corona. The Tijuana Xolo exploded onto the scene in the Mexican Primera and, after toying with representing Mexico internationally, had a change of heart and decided to play for USA. His hat trick tonight was sure to send shockwaves among soccer media and fans of Team USA.

Both Corona and Diskerud were particularly impressive. Diskerud's quick passing and cheeky moves were enough to distract the Cuban players and his back and forth with Adu and Corona made for some fun soccer to watch. And yes, Adu still has it. A great long distance shot reminded us of that fact.

The USA U-23 still have two more games in the group phase against Canada and El Salvador. Both are much more demanding opponents than Cuba but it looks like this American team has what counts to make it deep into the tournament. They did, after all, defeat the other powerhouse--Mexico--in a friendly in February by the score of 2-0.
Posted by R. Mera Velásquez at 11:09 PM