Canada wins, no Olympics for USA? 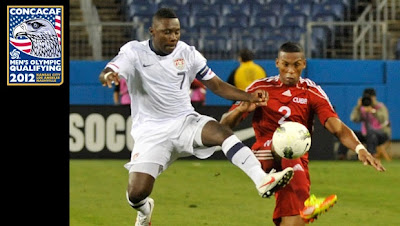 What a difference can be seen in two matches separated by two days. The US U-23 team, with Olympic aspirations looked paltry versus Canada and this showed in the scoreline as the Maple Leaf team defeated the US by the score of 2-0. Really? Yes, the game versus Cuba two days ago doesn't count today.

There was an unfortunate absence in today's match for the US: Juan Agudelo. The New York Red Bulls striker will be out for 3 weeks with a torn meniscus. Would he have made a difference? Hard to say, but Agudelo was more likely to put some of those balls away where Teal Bunbury failed to connect. Caleb Porter pulled a weird one in this match also when he subbed Joe Corona out for Joe Gyau. It didn't pay off and the hat trick hero from the Cuba match had to settle for watching the game from the bench.

Canada's first goal came from a glaring error by DC United goalkeeper Bill Hamid. The goalie was left in no man's land as he got beaten by the Canadian ahead of a corner kick ball. The US defense looked restless and out of sorts with little understanding between Opara and Kitchen.

What happens now? With the US at 3 points and El Salvador and Canada both with 4 points, a win is a must for the US, which will likely settle for a second place finish at best. This would mean potentially facing Mexico in the tournament's semifinal. Only the finalists make it to the Olympics. So yes, at this point it is hard to imagine the US making it to London playing the way they did today.

Caleb Porter will need to think hard on how to settle his defense and may need to turn to Sean Johnson to see how he does in front of goal. It's also clear that Bunbury is no substitute for Agudelo and that Boyd or Tony Taylor will need to come up big against the Salvadorans. For Canada, a win versus Cuba should give them first place in the group and may let them skip a match versus Mexico. Mix Diskerud and Freddy Adu didn't connect today and they will need to link up with Corona quickly if the US is even able to advance out of the group stage. Sad day for soccer in America.
Posted by R. Mera Velásquez at 1:57 AM