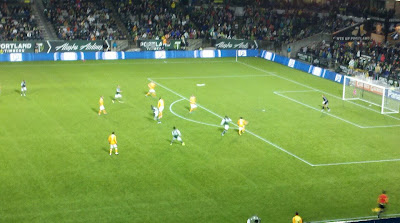 The Portland Timbers lost their final home game tonight. It was a bittersweet end to an incredible first season. From a 5 game winning streak at home, to their 1-1 tie at Seattle and their 3-0 victory over LA Galaxy, the best team in the tournament, to a terrible win-less streak at home, to being in and out of playoff contention, it was a whirlwind season. And no, it's not over yet, but the mountain is getting too high to climb at this point and they no longer control their destiny.
As I reached the bleachers late, I could sense that there was purpose in Darlington Nagbe's play and Kenny Cooper waited to pounce in nearly every goal opportunity. But the final pass was not there today. Houston made the most out of its two chances. Two chances, two goals. Dominic Kinnear pushed his back line as far back as he could so that the midfield was elongated and congested. There would be few dangerous plays for the Timbers after Houston' second goal.

Whether it was Zizzo's ineffectiveness, Chabala's injury, or Alhassan's loss of pace, the cards just weren't there for a Timbers win tonight. But let's celebrate the game for what it was: a testament to the soccer fever gripping the Pacific Northwest, to MLS' best idea since its inception, to the passion of the fans, young and old, male and female. Let's toast to the Timbers Army's fight chants even in defeat, to Timber Joey showing off his saw although no timber was cut, to the inebriated pair behind (and in front) yelling at the ref, to the older couple cheering or covering their mouths in agony with every kick, to the toddler smiling at his surroundings as his caring parents chanted for their team, and to all the kids decked out in full Timbers gear, dreaming about being on that pitch someday. This why we go to stadiums.

When I root I root for the Timbers! 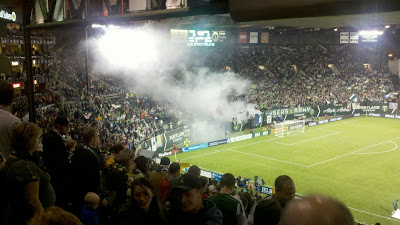