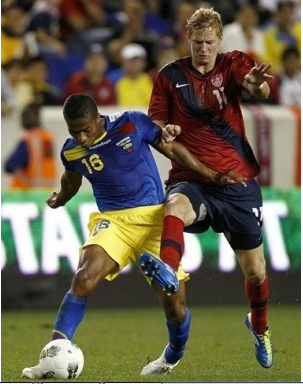 It was hard to cheer for either team tonight. For some of us, one is the country of birth and the other the country you live and love. As I had told my peers, I'd rather have a high-scoring tie. It was almost a tie. Almost. The young blood in both teams decided the match tonight. Jaime Ayovi, the future of Ecuador, had the better of Tim Ream, the up-and-coming center back hopeful for the USA. It was another 0-1 loss for the Americans.

The match was certainly 60% American. They pressed in the first half with a dangerous Shea and Williams. Edu pushed up to be the box-to-box player that has seen him blossom in Scotland. And Onyewu, the longtime partner with Bocanegra is certainly back.

For Ecuador, the stars were Jaime Ayovi, Jefferson Montero and Michael Arroyo. They were dangerous throughout the night and could punish you with any open chance. Benitez was around to clean things up in the front line while Castillo and Mendez held steady in their center mid positions. Valencia had a bit of an off game today after a great performance in World Cup qualifying against Venezuela. He was substituted due to his ineffectiveness.

How does Klinsmann answer his critics after tonight's match? "Tim Ream." Yes. Switching the youngster for the experienced Bocanegra so late in the game changed the nature of the defense and his touch was as off as it has been for him with the Red Bulls this year and during the Gold Cup. Perhaps George John and/or Omar Gonzales are better options. If Klinsmann really want possession and passing from the back, however, Ream is still top choice. And this is something that will haunt Klinsmann throughout the next 3 years because--let's face it--Cherundolo and Bocanegra will be much older (35) at the 2014 World Cup. One veteran in the back line, possibly Onyewu, should be enough.

The American's other worry is the goal. Who's scoring? Looks like it's still the midfield and only by a tenuous thread. Dempsey got the game-winner versus Honduras over the weekend but there has been no production from Altidore, Agudelo and Buddle. Who can he call next? Is there anyone else? But we can also argue that Jozy did not have the full time to get something going with the increasingly-dangerous Shea-Williams tandem. Charlie Davies and Freddy Adu, you may get a phone call soon.

For Ecuador, their back line is holding up through communication and the presence of Walter Ayovi. It can be argued that the fact that they all play in the Ecuador league, and more importantly in Quito, may be what the team needs to keep the Atahualpa unbeaten in this World Cup cycle.

Like the backup quarterback, when your team can't score all strikers look really good until they actually suit up and play.