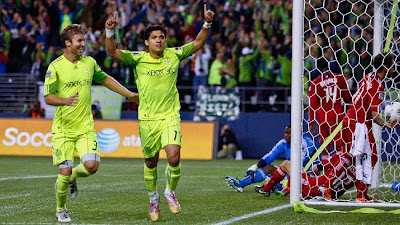 Seattle won the Open Cup tonight. Three-peat. Plain and simple. The team knows. The league knows. The country knows. Then fans know. From ball possession to Montero's opportunistic goal to Alonso's magic. It was the scintillating style of a champion team. But is it a dynasty?

Seattle has a monopoly on the Open Cup at this point. From the moment they defeated DC United in their inaugural season to the sellout record-breaking crowds, it was clear that the Sounders wanted this tournament as their own. And why not? Through the last decade, the Open Cup has been more of an afterthought to the majority of teams in the league. This season alone, the New York Red Bulls pulled all of their starting players from quarterfinals. Really? Yes.

And that's why Seattle's ownership of this tournament is important. It gives them credibility and a place in the Concacaf Champions League. And that's the other piece of information that most are overlooking. The CCL is likely to gain importance as Concacaf places more emphasis and perhaps reduces the importance of Conmebol's Libertadores. Seattle is now in place to not only make important gains in the quarterfinals next year, but also have now earned a spot in the 2012/2013 edition of the CCL.

Seattle's play was emphatic of the importance of soccer in the Pacific Northwest. Sigi Shmid has built a squad from the ground up with a clear attacking style, young designated players, and a way to make their crowd, their 12th man count. Ultimately, that's one of this team's strongest points. Their attendance numbers carry the league and are reminiscent of European squads. No empty seats. Just screaming fans urging for their Montero and Neagle and Alonso to score. And it showed tonight. Seattle's strike in the 95th minute came about as a great pass to a streaking Alonso. He evaded one, two, three players, a goalkeeper and struck it home like a Donovan or a Messi would do.

Well done, Seattle Sounders. The Open Cup is your cup and your dynasty.
Posted by R. Mera Velásquez at 12:28 AM

They are the New York Yankee Michael Jordans of something.