Ecuador's 2014 qualification campaign in the absence of Brazil 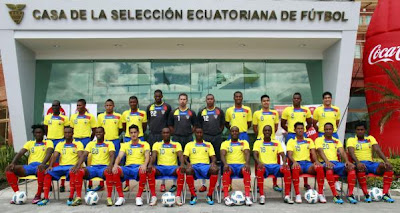 How does a field of 10 teams qualifying to the 2014 react when the number is reduced to 9. Back in the day when groups were the norm it was easy. Five and four per group. Top two qualify from each. However, those were World Cups with only 24 teams. Now there are 32 and the South American qualifiers are 4 + 1 an interconference play-in. Brazil is the host for 2014 and yet the field of Conmebol teams is not reduced. This raises the possibility that teams such as Ecuador may have a better chance in qualifying.

Things have changed in South America, however. This past summer's Copa America showed us that Venezuela can beat Chile and that Argentina can be defeated at home. The rise (and confirmation) of Uruguay as a world class team also changes the landscape.

At one point, having Brazil in the preliminaries meant your mid-table team could do without 6 points and that claiming 1 or 3 out of it put you ahead of the competition. How does the math change? More level ground? These days, your jersey color is no longer an appropriate measure of greatness. There should not be "winnable" or "unwinnable" matches.

Where does Ecuador fit in all of this? Right now, they are a bit of an underdog and this is a good thing. They were an underdog when qualifiers for 2002 got underway. Winning at home versus Venezuela was a necessary first step. Impressing against Brazil and Paraguay was another. And yet, the other key component of that squad, and even of the 2006 squad, was that most players in the team were part of the local league. This meant more cohesiveness, familiarity and teamwork.

The above was especially true for the defense. Reasco, Hurtado, de la Cruz, Espinoza were all more or less within the same city until after 2002. The midfield also was somewhat local with Obregon and Mendez playing for the same team. Today, the midfield is as it was for the 2010 qualifiers: scattered. The forwards are different, they are mostly based in Mexico.

The local defense (except for Walter Ayovi) will be an important weapon that can also serve as a double-edged sword. The players called up for Friday's game in Quito has individuals with less than 15 caps. How will they react to the rigors of international play? If they stay true to their roots from 2002 and 2006, it will be about intimidation and physicality to keep the Atahualpa intact and without losses. Home field advantage will be key and defenders need to keep this in mind.

The midfield will need to project their considerable international experience to control the ball and disrupt the opposing team's game plan. Valencia will need to act like he's playing for Manchester United. Noboa and Montero will have to show why they play in Europe. Mendez and Castillo will need to provide the steadiness of experience.

For the forwards it's a different tale altogether. There is no more Agustin Delgado. No more Ivan Kaviedes. No more Carlos Tenorio. No Caicedo, at least for the first match. Christian Benitez is our go-to striker and he will need to be fed well by whomever accompanies him. Perhaps a withdrawn forward formation will work best to take advantage of Valencia and Montero's runs along the flanks. Joffre Guerron is an intriguing posibility but so is Arroyo (also capable of midfield work) and Jamie Ayovi (speed). I have yet to see Suarez in action.

It' a simple plan. Use the crowd. Use the local players. Protect your house and enjoy the game. That's why we are your fans.
Posted by R. Mera Velásquez at 8:37 PM