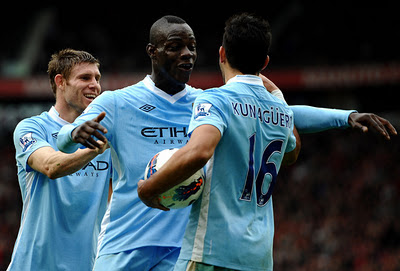 When the scoreboard in Old Trafford read 6-1 you thought "yes, United continued its dominance and tore another team apart." But wait. The scoreboard is reversed? And to Manchester City? Fans, critics and commentators were left with mouths open, some in disgust, some in joy, some in sheer wonder. This was the team that had just beaten Arsene Wenger's Arsenal by 8-2 earlier in the season. And now the result was reversed.

But how did today's game really happen? Several points come to mind. First, not all usual United stars were on hand: Valencia, Park, Vidic, Giggs, Hernandez, Berbatov. Some were inexplicably on the bench. Evans got a chance to play in the derby along with Welbeck. No results. Indeed, Evans proved the opposite by getting ejected with Man City already up on the scoreboard. Chicharito would come into the match too late for heroics. Park and Valencia never got a chance.

There was also some disbelief in United. Perhaps a bit too much cockiness for players like Rio Ferdinand and Patrice Evra. They weren't believing that Aguero and Balotelli could run rampant around them. Did they not care? They seemed almost amateurish, especially in Dzeko's goals. And the Bosnian was only a substitute. All in all, only the benched players and Wayne Rooney seemed to care.

There's another side to this coin. Manchester City has elevated its play in the past three years through a mixture of style and stars. Some stars didn't quite mesh (Tevez, Adebayor) and some were troublesome (Tevez, Balotelli). But the spine of the team with Lescott, Silva, Toure, Milner, carried the team to a new sphere. It doesn't hurt that the Manchester City owners have deep Middle Eastern pockets.

Today it was Silva and Milner's game. They dictated play by keeping the ball in midfield and gaining the upper hand in possession. Toure and Lescott marked United players higher up the pitch and controlled the flanks such that Anderson and Young had very few dangerous crosses. And up front, Balotelli and Aguero shined. Their shots were cruel and accurate. The passes that came to them from Milner and Silva were daggers into De Gea's area. And in doing so, they handed United their worst defeat at home in the Premier League era. Welcome, Manchester City. There's a new sheriff in town.
Posted by R. Mera Velásquez at 4:05 PM

Will Man U continue the bad spell for a few games and knock themselves out like Chelsea did last year or will the loss motivate them and set them to rights? Only time will tell. As good as City is you just feel their fate is still in the hands of the near annual champions United with so many games left to play.

Can't argue with that. It's good to see diversity in the EPL, though.