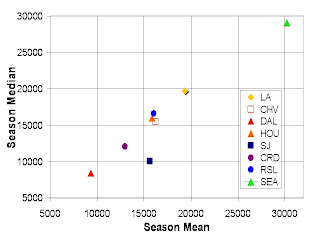 Updating for two weeks since I'm so busy. Concachampions action is going on now and not many at the stadiums: about 6000 at Columbus for the clash with Puerto Rico and about 8,000 in Houston against Metapan. Looking at this objectively, when we see the numbers in Marathon of Honduras, those were pretty low as well. Granted, it's a week night and no real big stars or big teams. Not much respect for the competition in general. We can compare this to low-level South American teams in the Libertadores or Sudamericana. Sometimes some games are just not that interesting.

Back to attendance analysis. Don't be too surprised with San Jose's climb out of the negative in the 2009-2008 attendance differences. They actually benefit from the Chivas (Guadalajara) versus Barcelona game at Candlestick in San Francisco. To filter that out I'm presenting the mean vs median for the western conference below.

Added to Beckham's return, barring red cards like the one that kept him out of a sold-out midweek match in Chicago, is the sudden influx of high-caliber Mexican strikers. In are Jesus Padilla and Luis Angel Landin. Padilla was usurped out of Guadalajara presumably due to the fact that he was born in the US although he is also Mexican by parentage. Keep in mind that Chivas is a team built to have exclusively Mexican players. Landin, on the other hand, is a proven striker for Cruz Azul, Pachuca and the Mexican national team. He is now the first designated player for Houston. The orange, always fun to watch, now add Landin to its considerable artillery. Look for a potential MLS Cup or semifinal at least.
Posted by R. Mera Velásquez at 7:00 PM