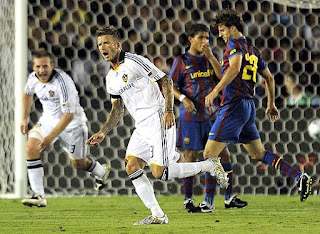 I'm torn, to tell you the truth. On the one hand I'm hurt as an MLS and US soccer fan that Becks acted with a certain degree of animosity towards the league while he was enjoying Milan. On the other hand he is easily one of the best set-piece finishers in the world and possibly in history. Him going out on loan was understandable and forgivable. We let Donovan go and even Alexi Lalas at one point. We also have to keep in mind that he has a shot at playing in the World Cup and anything to increase his chances definitely helps.

And lately he has been given hell by American fans. It's understandable. He didn't speak nicely about his "home league." He spoke of lack of fans, quality of play, and a lousy MLS infrastructure. Not what you want from an "ambassador," right? Compounding that is the man's inability to cope with the constant harassment by fans at Giants Stadium, the Home Depot Center and at the Rose Bowl.... but wait. He was booed when he touched the ball, booed when he set up a free kick and then the "boos" turned into "yays" once more. I would say he won 60% of fans back... including myself. I couldn't help the "yessss!" that I let out close to midnight EST. I'm actually warming up to the idea of part time Milan-Galaxy... but... always in motion is the future.

In the meantime, enjoy the show:

Despite his smearing the league a bit while on loan, I still think his presence in the league offers far more good than bad. Mainstream media is talking about the league, and not in a bad way. Whether they're rooting for or against him, the fans are in the seats, and they're passionate about the match at hand. I liken his presence in MLS to Tiger's impact on golf. Valid comparison?