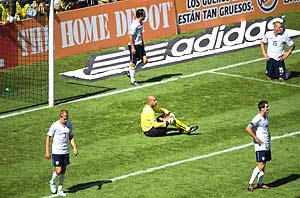 Not inconceivable. Not in the least bit. The nail-biting, number-crunching, sports scheming and media attention has begun now that four teams in Concacaf are separated by only 3 points or less: Costa Rica (12), Honduras & USA (10), Mexico (9). FIFA allows for 3.5 spots for the North, Central American and Caribbean Football Confederation in a world cup. And the half spot? That's a play-off game with the number 5 from South America, which right now could be Ecuador, Colombia, Uruguay or Venezuela. A few interesting results and it might even be Argentina in the number 5 slot. Ouch.

So the top three is what Concacaf teams strive for. Three spots to be safely in the tournament. And now that the Concacaf revolution is in full swing things look that much bleaker for US hopes. There are 12 points left at stake. Two games at home versus El Salvador (Sept 5) and Costa Rica (Oct 14) and two away games at T&T and Honduras. We might as well write off the Honduras match as a loss. Not many counted on that result either. Onyewu will be missing in next month's crucial contest in Sandy, Utah versus the cuscatlecos. Who will step up? DeMerrit? Bocanegra? Marshall? Califf? This is an absolute must-win, and it should also be by as many goals as Davies and Altidore can muster.

Trinidad and Tobago will be waiting in Port of Spain for what is sure to be the most important of matches. A win there and we would have 16 points heading out to Honduras and then home versus the Ticos. I can go on, but instead I'll point you to a great source.

So what happened yesterday at the Azteca? Lack of concentration? Poor formation, starters? Too much hype? Yes, a thousand times yes. I was worried about it and kept on saying it to every soul I spoke with. The US was inevitably going to lose that match and we should not build it up the way the media had. Thirty minutes on ESPN prior to the game in a special supposed to prep America for another "miracle on grass" was a hard pill to swallow knowing that there was a 70% chance the US would come up empty handed. Watching (actually just glancing) a bit of PTI in which they mocked Bob Bradley as someone that never won the "big game" was another death blow to American soccer fans. I have to agree with them and with commentators like Jamie Trecker that have time after time warned us of the cracks and seams slowly tearing USSF apart.

What if? Yes, what if the US lands into fourth position (we can go ahead and count El Salvador and T&T out unless deities answer their calls) and is forced to play against Colombia or Uruguay or Ecuador or even worse... Argentina? Will Bradley be able to answer such a threat? Will he have the team and resources to decisively win at home and get a result (gulp) away in Bogota or Buenos Aires? And if they lose the playoff, what happens to US soccer? What happens to MLS and all the great strides the past 20 years have brought us?

Casual fans abound in this country and they are not selling out to a team that repeatedly loses the "big game." What if we don't even show up to the "big game"? These are points Bob Bradley, Sunil Gulati, MLS and the whole of US Soccer need to be seriously going over right now, especially when we're all signing up and teaming up for a 2018-2022 World Cup bid. Another point is thinking through the qualifying process. Right now it should be more important to get into the tournament than to shop around venues. Playing T&T in Nashville is one thing, but Honduras in Chicago and Costa Rica in DC is another. I'm hoping to make the trip to DC myself but I'm willing to pass on the opportunity if they can switch the venue to Columbus instead. USSF officials should make sure that the important thing should be the result of a match and not just the revenue. Much more will be lost monetarily if we miss the World Cup.

I have to admit that this is a bigger test than any in the past... and it's good for the players and the game in the region. The US Soccer Federation needs to admit to its mistakes and grow from them, even if it means sacking personnel in order to allow for more seasoned individuals. I think, and we all agree on this, that the time for this has come and passed.
Posted by R. Mera Velásquez at 9:38 PM