Protect your house: Mexico hosts the US in World Cup qualifying 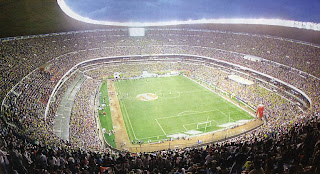 Mexico will receive the USA at the Azteca this Wednesday at 4PM Eastern. As always, I like to keep perspective on what the US national team is able to accomplish. This summer was a rollercoaster for the national team. Starting with a horrible loss in Costa Rica with an experimental line-up that had several pieces missing, to redemption at Soldier Field coming from behind to triumph over Honduras, to falling from grace against Italy and Brazil in the opening games to the Confederations Cup. Wait, we're not done. The Americans gathered the pieces left, blanked Egypt 3-0, and with a little aid from Brazil they got through to an improbable semifinal against mighty Spain. We were hoping for a dignified exit from the tournament against the number one team in the world. Altidore and Dempsey showed up as well as the defense and a "miracle on grass" took place with their mildly historic win. A crushing loss in the final 2-3 against Brazil, compounded with a terrible goleada administered by arch rivals Mexico in the inconsequential Gold Cup buried all the hype and clamor the team had achieved earlier in the summer. 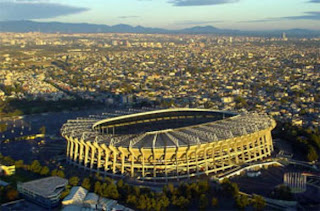 Now the US is hungry again for glory and they have a full-strength squad on hand. They look for the improbable... a win at the Azteca, another "Aztecazo" that will further cement them in Concacaf royalty. Only Costa Rica has been able to achieve this in recent memory. Honduras had delusions of grandeur late in 2008 when they thought they could steal 3 points away from the Aztecs. Wishful thinking indeed.

Does this mean it's not possible. No. We can never count anything out in sports. But there exists a fundamental difference between the US and Mexico that goes far deeper than comparing the domestic leagues. The difference is the fans and the crowds. The US may be able to pull of a 60-40 or 70-30 majority at the Columbus Crew stadium but nearly everywhere else the Mexicans always hold home turf within this country. This is a unique situation in the entire planet. And when it comes to "El Coloso de Santa Ursula" you can expect a 99.9% Mexican crowd of 113,000 screaming fans.

Another important point that is different between the two sides is the media coverage. Where the US gathered important attention after the Spain match, nearly all the casual viewers were turned off either by the Brazil match or the Gold Cup final match. Only die-hard US soccer fans and the underground soccer media awaited word on the potential team to be used in Mexico. Where Aguirre chose a squad two weeks prior to the contest, Bradley responded just last Friday. More pressure for Mexico, undoubtedly. 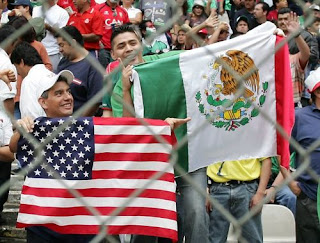 Finally, let's not forget the recent 5-0 loss at Giants stadium with a half-full Mexican squad and a highly inexperienced American side that had none of its starters or even the token substitutes. Mexico is keeping a good number of the players from that match for this one. Here's Aguirre's squad:

Invariably, it comes down to true home field advantage. It comes down to history and comon sense, to European-based players and media coverage, to years of practice and reputations. The US is going for history and this is exemplified by the ESPN spot prior to a game that won't even be on the network itself. Hours of coverage in several other Spanish-speaking networks is the Mexican response.

TV coverage for this match is tricky. No ESPN or Univision or ABC. If you have Telemundo (Charter and Comcast usually carry it) then you can see it in Spanish. For the English version there is mun2, usually an extra channel on satellite and cable. If all you have is internet then you can check out the game here or here.

Look at it this way - we are due to get a win there.

Even a draw will be a huge result. I think we can do it, but that place is kryptonite to visiting teams. Smog, elevation, 110000+ fans?