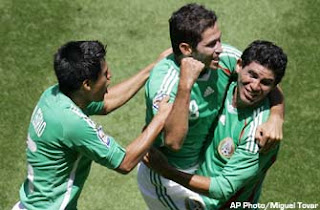 Perhaps we built this game up too much. Perhaps we built up the players too much. Perhaps Spector and Bornstein would have been better on the flanks. We'll never know. The truth is today Mexico won fair and square. They went down early, picked up the pieces, and penetrated the defense long enough and often enough to take down Howard's efforts. The scoreline would have been much bigger had Tim not been on goal.

So what did it? The stadium and the fans. They were enough to break the nerves and enough to allow Mexico's midfield to disrupt Donovan and Bradley to the point that they were phased out of the game quietly. Coupled with that was the inability of Cherundolo to be the attacking option that Spector brings and the speed at which Bocanegra moved around. There's no room for excuses here, though. The Aztecs came to play. They never let down. They never gave up. They controlled the ball and passed well.

Mexico's goals came from opening up too much space in the middle for the first goal and just plain persistence and poor clearing for the second goal. The US had a great chance with Davies early in the second half but he came up short.

Finally, it's the Azteca. It's the fans. It's the 105,000 that payed overpriced tickets to experience the best game the region has to offer. It's also history, and it continues to be written the same way. Counting off the Gold Cup as an aberration that should not have happened, I think we can pick up the pieces and move on. This was a game we expected to lose, just like the Costa Rica match. Another one we're likely to drop is the Honduras game. It's the team's prerogative now to win against El Salvador and Costa Rica at home and to try to pry points away from Trinindad and Honduras away.

Great game. Heartbreaking loss. What a goal from Davies! 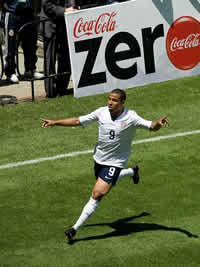 I heard something about Donovan having swine flu. Did that impact his play possibly?

Yes and yes. But Mexico was still better.