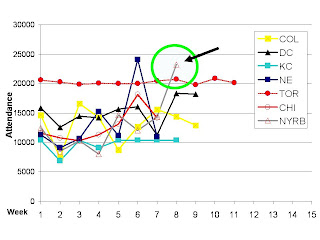 All east slew of games this past week. Lots more attendance with Becks, albeit only half of what it was on his debut at Giants Stadium back in 2007. Still, the 23238 figure was the highest for any games with Red Bulls this season. It serves them well for being sooooo bad this season (only 2 wins!). I'm highlighting the match's attendance and how it influences the general pattern in this time series.

Elsewhere it's nice to see so many people turn out for the international games. A near-full Rose Bowl at 81,000+ for Inter-Chelsea is not bad. No love for MLS, though. I was in a discussion at soccerbyives.net about what the MLS all-star game should be about. Besides its token American existence (what is it with all-star and pro-bowl games in this country?), and instead of MLS all-stars versus Everton, why not play MLS all-stars versus true world all-stars. I'm talking Messi, Ibra, Kaka, Ronaldo, Evra, Lampard, Terry, Ribery, the whole bunch. Now that's a game worth watching!
Posted by R. Mera Velásquez at 12:39 AM