Another Cup, another final: US in the Gold Cup 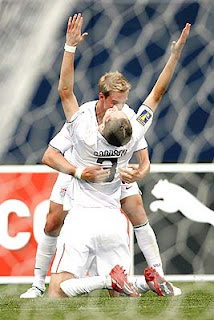 If the Confederations Cup is considered the dress rehearsal for the World Cup for what are considered to be the top teams in the world then the "meaningless" Gold Cup is the dress rehearsal for the backup players in each team. Such is the case with US players like Chad Marshall, Stuart Holden, Kenny Cooper, Kyle Beckerman, Heath Pearce, Robbie Rogers, Troy Perkins, etc. These are all good players, yes, but they fall behind the Dempseys, Donovans, Bradleys, Howards, Onyewus and company.

The midfield pool, for one, just became much more crowded and starters, subs, and call-ups will have to be based entirely on form and quality of team (Europe-based will get the nod nearly all the time). Added to Dempsey, Bradley, Adu, Clark, Feilhaber, Torres, Kljestan, Edu and (hopefully) Jermaine Jones, are Holden and Rogers. Holden would probably take over Kljestan's spot. The once great prospect has faded slowly into obscurity. Also note the omission of DaMarcus Beasley. He has also lost his form... and his place.

The deal up front is a bit easier. Ching is still the target forward, although his finishing hasn't been great lately. Kenny Cooper is, to me at least, a better option than Conor Casey. The back line has some nice backup options: Goodson, Marshall have stepped up and are capable of standing in for Bocanegra, Onyewu and DeMerrit if required.

And now comes the final. Against Mexico. Again. This time it's none of the starters save for Dos Santos, "Memo" Ochoa, Carlos Vela, and Brian Ching. B side versus B side. A chance for more heroics and for some also a chance to be included in the 23-man squad in 2010.
Posted by R. Mera Velásquez at 11:35 PM