Becks is back, does it matter? 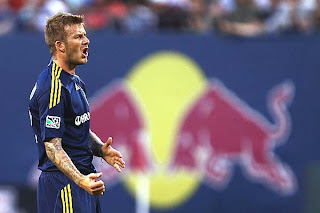 Yes and no. Yes, the stadium in East Rutherford tonight was near MLS-capacity (25K) but nowhere near the 56,000+ that attended the first Beckham Galaxy-Red Bulls match in 2007. Back then it was all shining lights and bright dreams in a season that saw Goldenballs play a total of 5 MLS matches. The figure for the same match last year was closer to 40K. Granted, this year people either hate Beckham or hate a cellar-dweller New York team reminiscent of 2007-2008's EPL team Derby County.

No, it doesn't matter that Beckham's back. Not for the Galaxy. Not for Bruce Arena, who has managed to lose only 3 games this whole year, even if it came at the cost of 7 ties. This team is no longer built around the pricey Englishman. It has a solidified midfield with Kirovski, Mike Magee, Eddie Lewis, Birchall and Donovan. Its attack has been amplified with the addition of 2004 Rookie of the Year (and injury prone) Alecko Eskandarian. Edson Buddle and Alan Gordon are decent attackers as well which, compounded with Donovan's ability to slide into forward, makes for a significant threat to the opposing team. The back line has also been reinforced with the introduction of veterans Greg Berhalter and Tony Sanneh, and surprising rookies DeLaGarza and Omar Gonzalez. We're also not counting the injured Kovalenko and Sean Franklin in this list.

So the question is this... Does the Galaxy need Beckham? Not really, but his experience adds to what is, at the moment, a solid team. Does MLS need Beckham? Only if his intentions are clear and benefit the league. Do the fans need Beckham? Yes... one word: drama. For more of this go pick up "The Beckham Experiment" by Grant Whal, an excellent read from what I've heard and something the league has needed for a good while now.
Posted by R. Mera Velásquez at 12:10 AM