Ecuador: A few observations from a soccer nation 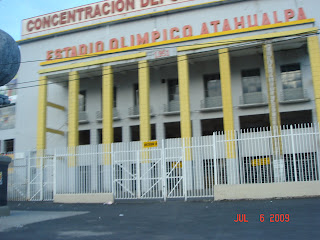 Ecuador, the place of my birth and the reason soccer runs so deeply in my veins. I'm giddy when Ecuador wins, pathetically upset when they lose but at the same time I remind myself that we were always the underdogs. Behind Bolivia and Peru and only superior to Venezuela. Now I cheer for the USA with just as much candor. It is my home and has been so for much longer than Ecuador ever was. When it comes to clubs, however, Emelec is my favorite team. And this is much to the dismay of both the Velasquez and the Mera families (fans of Barcelona SC de Guayaquil).

Added to all of the above, I am also related (nephew) to the great Mauro Velasquez Villacis, author, commentator, friend of Pele and Alberto Spencer. I spent a few precious minutes with him in his majestic soccer vault, where he stowed away detailed statistics on all the major games of the world, descriptions of every goal Pele scored, news and notes and biographies of countless soccer personalities. Today's posting is not so much about him but more on what people there think of the US game, important recent events and past stars. I spoke with uncle Mauro as well as other fans of the beautiful game. The questions are generic and the answers are the general feel from all the interviewees. Here are a few words from them . . .

What do you think of the US national team?
Very solid. Great faith in their game and extremely focused. They stick to the game plan.

And what about the future of the US in soccer?
They can only get better from here. They have the seeds and the infrastructure.

Is Cristiano Ronaldo really worth the millions Real Madrid spent on him?
Yes. There is no one else like him.

What about Argentina? Maradona?
Maradona's appointment was just a stunt. He can't coach. He wasted away his brain cells through years of drug abuse. Argentina won't go far with him as coach. 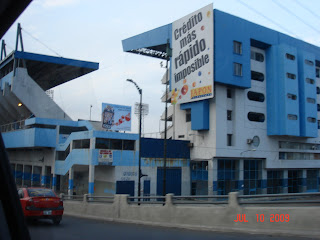 What do you think of the current Ecuador national team?
Felipe Caicedo is not working well for the team. He's too erratic and not dangerous enough and does not compliment Benitez.

And Liga de Quito's triumph in the 2008 Libertadores?
There is a difference between club and country. Most answered they did not care for Liga's success since it's a club and does not represent them (most were Barcelona or Emelec fans). I feel otherwise. It was a triumph for Ecuador soccer, one that added to the national team's success in 2006. I wrote more about this on another blog entry.

That's all for now. I was enlightened by my soccer talks during my brief stay in Quito and Guayaquil. I will have a couple of posts dedicated to Mauro Velasquez Villacis. Stay tuned.
Posted by R. Mera Velásquez at 11:31 PM

Sounds like you had a blast in Ecuador. Look forward to hearing more later.