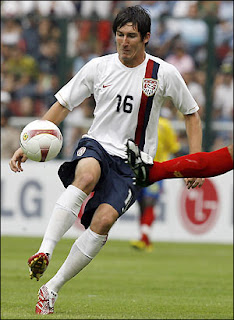 This team is not too different from the one that played the last friendly against Mexico in February of last year in Houston. Cherundolo's presence in the back will be missed but homeboy and ageless Hejduk will fit just fine playing against his home crowd at Crew Stadium. Also in, although maybe not in the final 18 are speedster Marvell Wynne, composed Dan Califf and feisty Bornstein. The midfield is where it gets interesting... Out is Bobby Convey to be replaced by an impressive Sacha Kljestan (hat trick versus Sweden). Freddy Adu's lack of minutes on the pitch have meant his temporary replacement by Mexican-American Jose Fransisco Torres (recently chose to play for the US instead of Mexico). This is a brilliant move by Bradley considering Torres' play with Pachuca in the national and international scene. It's also great to have someone in the team understand the inner workings of the Mexican League play. Ricardo Clark is steady at midfield and does the dirty work whilst Robbie Rogers and Michael Bradley (coach's son) inject some youth into the system as well. Up front we have some of the usual suspects with Dempsey as an attacking midfielder/striker in an "enganche" position. Donovan always a must as is Brian Ching's experience. To round things out are American prodigy and recently transferred Jozy Altidore and Sweden league standout Charlie Davies. 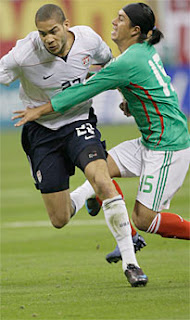 As we move closer to gametime more and more of the Spanish media in this country covers the Mexican team. Some, like XM Deportivo's Futbol de Primera program with Andres Cantor, Sammy Sadovnik, Rosa Beatriz Sanchez and Jaime Gallardo are annoyingly, understandably and poignantly on the Mexican side of the balance. Sometimes it makes me wonder... hey, Andres aren't you and Rosa and Sammy Argentinean? Well, such is the market for mainstream latin soccer in the US. It's interesting, however, to point out the scale of meaning of this match. Here in the US, to most, it's just another sports game. To us fans of the sport and of the American team this is the grand Superbowl of them all. In Mexico and to the legions of immigrants already on American soil, this is the biggest game of the year. It shouldn't strike as strange that Blockbuster in Mexico as well as a certain newspaper started circulating voodoo dolls of the US national team to inject certain doom for our players. USsoccer has outdone itself this year in various ways... first is playing in our home base of Columbus. It may not be as cold as we thought a mid-February match would be but considering both teams have players at high latitudes this shouldn't be the determining factor. Instead we have a fortress of american fans in an intimate scenario, mainly colored red, at the stadium of the current MLS Champ--Columbus Crew.

As a wise man once put it: Two teams, both with head coaches, playing the game of football. This should prove to be a great game!
Posted by R. Mera Velásquez at 1:53 PM

There was a major league baseball player in the 1980s named Marvell Wynne. Any idea if this young footballer of the same name is his son?

Actually... that is the case. His father is indeed the baseball player you're talking about!
http://en.wikipedia.org/wiki/Marvell_Wynne_(soccer)

Very cool thanks! Do you have any thoughts on the recent Premier league firings? I watched the Portsmouth loss to Liverpool on Saturday and it was quite a tragedy to see them blow two leads in the second half and then fall in the closing minutes.

Portsmouth is a mess and so is Chelsea. They have aging squads and poor management. Portsmouth just recently let go Jermain Defoe, which seems interesting since he was consistently scoring for them (also on my fantasy team). Chelsea has been a mess since Abromovich started messing with Mourinho and sacked him for no particular reason early last season. Scolari has his ideas and moments at Chelsea but needed more time and a thorough rejuvenation of the team.

Sounds like how Steinbrenner ruined the Yankees in the early 1980s by constantly firing managers. It will be nice to see a different squad in European play. Here's to Villa keeping up their strong efforts.