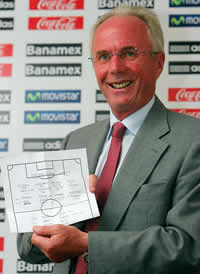 This is the first part of a multi-post series detailing what is sure to be a match worthy of world class soccer: US vs Mexico at Columbus, Ohio next Wednesday at 7PM (ESPN2HD) for world cup 2010 qualification. For those not familiar with the qualifiers this is the first game in a home and away tournament with 6 countries vying for the 3 1/2 spots to South Africa next year. Each team plays 10 games in total. The group, besides Mexico and US, includes Costa Rica, Trinidad and Tobago, El Salvador, and Honduras.

Mexico is never a weak side, no matter how many Guardados or Velas are injured or suspended. Superclasicos like US-MEX always are tossups. Also, a word of caution to the overconfident... This is a Mexican side in dire need of a good result. To them a win is a must, a tie is acceptable and a loss is a catastrophe. Jaime Gallardo and XM Deportivo company have seen "el Vasco" Aguirre's dismission from Atletico Madrid as a precursor to replacing Eriksson were he to fail in Columbus. This is ridiculous to me. There are 9 other matches and of all 10 winning in the US should be, in theory, the toughest. 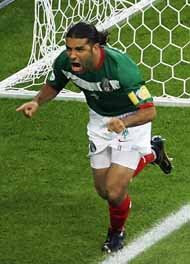 A new crew of players is also at hand, including Vuoso, Naleson, plus some that have not been called up recently (Castillo, Franco). Some players, like Castillo, have not seen regular play in their European teams but this is also the case with US players like Pearce, Adu and Altidore. Some players to watch for are Castillo, "el venado" Medina, Omar Bravo and Matias Vuoso. Marquez, Osorio, Salcido and Galindo are a fortress in the back. Villaluz is a potential headache, as is Pardo (the savior of Mexico these days).
This is my homage to Mexico, always a disciplined, historical team with diehard fans that will make up a large portion of Crew stadium next week. Good luck, fellas, and may you have a good game.
Posted by R. Mera Velásquez at 4:55 PM