Galaxy blues: From Beckham to Donovan 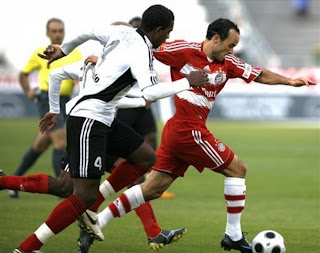 I will not dwell on the Becks subject anymore. Besides the "deadlines," incessant squabbling and endless rambles by bloggers like your truly, we should face the facts: the league would be losing anywhere near $30-50 million per year were Becks to be absent for the next 3 years. It's only logical to make at least some of it back (say $15 million). Remember that Becks does have an escape clause after his third season (2009) so the league better act on it now if it's going to make any money from this situation at all.

Back to the point. Okay, let's say Beckham goes. AC Milan breathes a little easier (although Zlatan's Inter is probably going to take the Scudetto) and Bruce Arena can forget about the circus. What about that other marquee player "currently" in the Galaxian's ranks, Landon Donovan? Donovan is the poster child for US soccer and at just 26 he has amassed quite a resume, albeit incomplete. Last season's MLS top scorer and the leading goal scorer for the men's national team (37 and counting) has one missing piece: the pedigree of a place in a European league. Sure, he had his time with Bayer Leverkusen earlier in his career but he never quite settled into the Bavarian life and game and was shipped back to America only to blossom with the Earthquakes and then the Galaxy. I've seen the man in action and he's always dangerous for rivals. Who can forget the goal scored against Mexico in 2002? Not me, that's for sure.

And yet, recently, Galaxy made more than one potentially catastrophic loan to a club in Europe--Landon Donovan to Bayern Munich. This weekend, with the loss of Luca Toni, Donovan has his best and possibly last real chance at staying in Europe. Unlike Beckham and much like other Americans abroad, he has the stigma of being from a nation other than Brazil/Argentina within this continent--that is, you better prove it within 3 weeks or you're benched, loaned out or shipped back. Granted, Juergen Klinsmann likes the guy and trained with him in California, he will still need to score in an active competition in order for the Bavarian club to offer any sort of compensation to MLS for the loss of another prodigy.

Donovan is in a position where his career, MLS's image and US Soccer would benefit from a permanent move abroad. What's better than having the top scorer in US history play in a marquee league and team on European soil?

Potential outcome: MLS sells both Becks and Donovan. Part of the package in a deal like this would be to get a player from Milan (Sheva?) and/or Bayern Munich as well as (pointless but highly attended) friendly games. This could also open the door for DaMarcus Beasley to come back to the States and play under Arena once again. I hope Beasley stays in Europe, however, but I prefer that he switches clubs since Glasgow Rangers aren't giving him many nods on any given week. That said, the Galaxy will be very lonely, hurt and depleted. Only a truly big signing and perhaps repatriation of a player like Beasley might douse the wildfires set ablaze this MLS off-season.
Posted by R. Mera Velásquez at 5:05 PM