Liga still has it 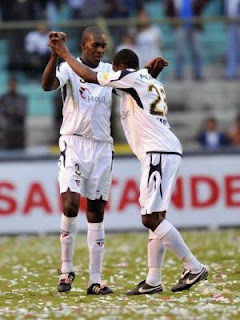 In a world torn between school and a timely dinner, one would not expect to find time to watch Copa Libertadores. Yet some like myself still manage. I was able to watch about 60% of today's game between reigning Libertadores champions Liga Deportiva Universitaria de Quito vs Palmeiras of Brazil as well as pieces of the Boca Juniors - Deportivo Cuenca (also from Ecuador). I got help from my DVR while at home and a little website called justin.tv that has streaming video, including sport from almost anywhere in the world. That's right, next time you feel left out because you're at work or school and only have access to a PC, never fear. No matter what system you're running (Linux, PC, Mac), it should work fine.

This quick post is an homage to Ecuador futbol, which although still ailing from a bad start to qualifying when Luis Fernando Suarez was at the helm, still has club football to represent. It was Liga's turn to defend its crown in this season's Copa Libertadores. They opened their campaign against an established Brazilian side.... Palmeiras. To start, one can never count out an Argentinean or Brazilian team at any point in international club competition. That being said, however, Liga still thoroughly outclassed the Brazilian side. Don't get me wrong, Palmeiras looked good in the attack and scored two goals. But it was Liga's persistence through the play of Urrutia, Manso, Reasco and Bieler that time and time again got through the brazilian defense. The result was an exhilarating 3-2 match won by the Quito team.

Sure, Joffre Guerron and Luis Bolanos may be gone but Calderon and Araujo make up for the losses, as does the return of the great Neicer Reasco after an unsuccessful stint at Sao Paulo. Liga's spine remains: Urrutia, Bieler, Manso, Calle, Campos, Ambrossi, and Pepe Pancho Cevallos.

And what about the team that only wants the Libertadores? Boca Juniors of Argentina, that is. I heard on the radio that club officials put the continental competition as a higher priority than the domestic league. Well, when put against Ecuador's modest Deportivo Cuenca things didn't quite look right. Aside from Palacio, Riquelme never found his rhythm and Palermo was out of touch. Cuenca looked a bit lost, I must admit, but they only just lost the game by 1-0. It's still early, ladies and gents, but there's still room for the Liga faithful to dream.

Enjoyed your mom's site and have it bookmarked. I can certainly use some practice with my rusty Spanish! You will have to show me sometime how you can link to other blogs.

Yep.. I linked hers through a picture. I wanna do it for yours too. It would be cool if you gave a catchy line or something plus a pic so I can link it through my website.

Where would you need this catchy line and picture deposited? I will put on the ole thinking cap.