Back to reality. No inflammatory Brazils or Becks coming to town to attract the casual viewer and temporarily shift the attendance figures. You'll note that week 13 is a more normal week with attendance averaging just above 15K. I've read a couple of threads over at bigsoccer.com that speak of the "unfortunate stadium situation" with San Jose and Kansas City. I both agree and disagree, for even though the smaller venues will make general attendance figures lower, the atmosphere and the feeling of a full house is much better at Buck Shaw and CAB than a cavernous Crew Stadium or Pizza Hut Park, which currently have the lowest averages in league and usually with empty seats --and those are soccer specific venues. I think a lot of us out there are being a little shortsighted and again I argue that we should look at the relative terms of attendance. Smaller cities will have smaller venues but will fill up the stadiums nonetheless. It's more of a cup is half full sort of idea. Just look at the numbers and plots I provide... doesn't it ring more than one bell when we see extremely small (50%) turnouts while other teams exceed their own MLS capacity (SJ, FCD) for visits from the DPs (right now only Becks and Blanco count for obvious reasons)?
I've also seen a lot of information regarding Philly and Seattle potentially increasing the total turnout numbers. There's been back-and-forth animosity between TFC followers and those that oppose having Canadian teams in the league and I must admit I find this saddening. I would love to see more Canadian teams in the league. I would put both Vancouver and Montreal and have the remaining two spots for a 20 team league come from places such as New York, Miami, Atlanta or St. Louis. But why Canada? More exposure, more experience, more money, that's why. Exposure for the game in North America, experience for a whole new generation of players that will grow up always having a soccer league and always aspiring to be a part of it. This will elevate the level of play in CONCACAF for sure.
But back to the stats. I'm including a new piece below of the relative attendance for all games in which Becks and crew have played. Clearly Becks overflows stadiums and Blanco fills them up to more than 80% as well. Gallardo enjoys the faithful DC followers while Lopez regularly plays at the smaller CAB venue in KC, thus filling the stadium. This may not represent much unless we look at Angel. I might venture to say that if both Gallardo and Lopez played for NYRB then their numbers would be closer to Angel's. 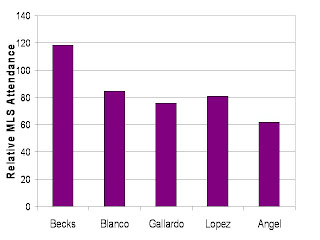 Can you please tell me the overall MLS attendace comparison right now to last year?

This time last year: 15064. right now is 16368
The numbers on my difference plot are for the entire season. I will generate a new one for difference at this particular time
I noticed you're looking at week 13. week 16 update is here:
http://www.futbolusa.net/2008/07/mls-attendance-stats-week-16.html