Bring it: US vs Argentina 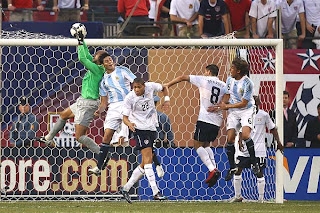 Picture is worth a thousand words. Howard and the defense shut down another Argentina attack.
Call it a miracle. Call it revenge. Call it awesome. Call it justified. Whatever you call it, yesterday's game between the US national team and Argentina before a sell-out crowd at Giants Stadium was nothing short of spectacular. Sure, 0-0 was the tie, but the play was amazing from both sides. The number 1 team in the world showed just that in the first half. They can easily dominate CONCACAF competition (they beat Mexico 4-1 last week), Messi can tear it up wherever he goes and Cruz and Mascherano light it up elsewhere. Their defense is as strong as their offense, as they proved throughout the game. But in front of them was a US side aching to redeem itself after two losses in Europe against top competitors in the form of England and Spain. I'd like to think of these games as a gradual evolution.
Act 1: Game 1 vs England was a learning process bathed in the everlasting light of football's cradle-Wembley. The US side looked lost and confused and downright outplayed by a limited English side that was unable to star in this summer's Euro competition. Stage fright got the most of them and Bocanegra failed to deliver and Adu only had limited time on the pitch.
Act 2: Spain proved to be a worthy competitor with astar-studded offense but the United States showed competence and a stifling defense that cut down the final plays from the spaniards. Johnson got very close to a historical goal. It was not to be. Xavi scored in a fantasy play and the game justly ended with the Spanish as victors. Others out there in the media repudiated our national team and downplayed its performance as a failed attempt. Still, others like Ives Galarcep and Steve Goff gave our team credit for a game well played albeit still not without fault.
Act 3: Evolution is a tricky process, for as the first game portrayed a CONCACAF side reminiscent of the 1980s and game 2 showed improvement akin to that in the 1990s, then game 3 showed why the US made it to the quarter finals in 2002. The defense was there, the offense created chances, and the play was worthy . Heath Pearce crippled many an Argentine attack and Tim Howard showed why he's one of the top players in the US. Onyewu held his own and Cherundolo fed plenty of balls. Califf, Bradley, and Dempsey also held their own. Donovan reiterated why he was performing in his 100th cap for the national team and Dempsey and Beasley un-rusted themselves and drew plenty of fouls. Adu again showed what he has promised all along and why he should be a permanent starter in any team he plays for. Edu, Mastroeni (red card?) and Kljestan also held their own, as did Lewis and DeMerrit. That was the kind of team I hoped and had faith we still had. Barring any difficulties in the next round of qualifying we should have a strong team for the last qualifying round and areas to work with for the Confederations Cup and South Africa 2010.
I hope we get to see more of Adu, Altidore, Kenny Cooper and Robbie Rogers in the mix for the next couple of games against Barbados. Maybe Jimmy Conrad should be in the mix too.
That's it from me for now. MLS stats on their way later in the week.
Posted by R. Mera Velásquez at 8:58 AM