Welcome to your weekly fix of MLS attendance figures. Granted, Euro 2008 is all over the headlines and world cup qualifiers start this weekend, still people still went out to see their teams. It reminded me that important international matches kind of act like a tease, almost like foreplay for going to see live games. Back in 98 when the US played Iran (a sad day in football) watching the game got me all primed for a live match (el clasico del Astillero--Emelec vs Barcelona SC in Ecuador). So why not have the same sort of enthusiasm here? Not so much, it seems. Save for a near sellout crowd at Toyota Park to watch Blanco's Fire play against Gallardo's DC and a healthy Becks crowd in LA (still no sellout), attendance was pretty slim...especially for New York, which now has one of the lowest averages (13,042). Only KC and San Jose are lower (9,210 and 12,479 respectively) and Columbus with 12,270. KC and SJ have much smaller stadiums, however. Columbus is a sad note and it begs the question of whether the team should be moved to a different city (Miami?*) But wait.... what about New England? Why is their average so low? The magic number is actually 10,289 with an "MLS capacity" at Gillette of 20,000. That is... unless NE claims a higher than normal attendance due to Beckham or (gulp) Brazil??? That's right! The "doubleheader" last week where a surprising Venezuela beat Brazil was featured right after the MLS game. So should this count? Yes and no. This week it doesn't simply because it will fall under next week's numbers. Otherwise a team will play twice in one week and that just doesn't work for our purposes. So for this week we'll still have NE at the low end of the scale. I'm all for enhancing attendance numbers with the presence of Beckham and/or Blanco and that's why the bigger stadiums do tend to sell out and overflow their "MLS capacity." Such was the case with RFK and Giants stadium last year when Becks came to town. NE's recent doubleheader is a cheap way out. They will manage to change their attendance numbers for the season due to this "sellout" game. At least when Becks comes to town there is only one game. And the game includes your own team and nothing else. I have to stay true to the stats, however. Also note that the official attendance for the game has not been posted on the website. It was 54,000 for the Brazil game and hence it will count as their official figure for that day. 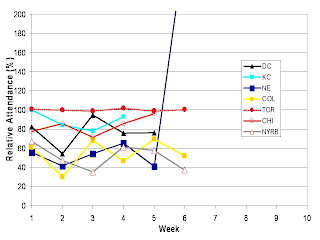