Euro or no Euro, people seem to be making it out to games even if it's just to see the stars (Becks in San Jose, Blanco and Davino in Dallas) or other countries play (Brazil-Venezuela prior to the New England game). Still, this is a statistics page and we must stay true to the numbers if these are the ones the league will put out at the end of the season. As is customary the general attendance figures will be on the right column. Starting this week I will add the 2008-2007 difference (also zoomed in below). Things don't look great for a lot of teams including Dallas, New York and Columbus but we can expect better numbers from the latter two once Beckham comes around. It's sad to see Dallas in such a precarious position even having had Becks and Blanco show their DP faces in town. Something must be done here to attract more people to the stands, especially considering that Pizza Hut Park is a soccer-specific venue. Denilson's failure last season shouldn't deter investors/owners from picking a new designated player.
I admit that some of the figures do appear a bit inflated at this time but this surpassing of MLS capacity is largely due to moving venues for San Jose (see image below) from Buck Shaw to McAfee for the LA Galaxy game and New England's Brazil crowd (see week 11's posting). The two peaks for San Jose represent the two games played at McAfee so far this year. All in all, conference and league averages were higher than normal and some team averages such as NE skyrocketed out of the cellar and into (ehem) normalcy. 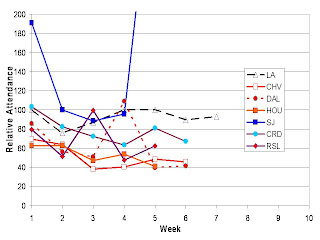 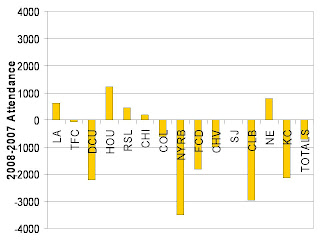