Things are finally beginning to level off at this point of the season. Trend setters aside and with highly contested fields both east and west of the Mississippi, this proves why MLS is more competitive than other leagues. This "competitiveness" is a relative term; it does not mean the league is better than, say the EPL or Serie A. It simply means that literally all things are equal. The salary cap, love it or hate it, and the lack of a relegation facet to the league ensures that any and all teams have the ability to win it all. One or two or even three DPs won't necessarily bank you a title. No Beckhams or Donovans or Ruiz put together can accomplish this if the team gets depleted by outside forces, i.e. national call-ups or injuries. But back to the stats... This past week was very poor in the west, especially from Dallas which despite coming out of the Morrow woes has remained below 10K after the Beckham-Buddle show a few weeks back (LA won that game 5-1 at Pizza Hut Park). Colorado also managed to dip below 70% and Chivas attendance remained as low as it ever was. San Diego Chivas anyone? I'm all for it. This derby isn't working. A second NY team would fare better, I think, and Ives Galarcep and others tend to agree with me. Below is the return of pie graphs. Don't be discouraged, DC. TFC has had 6 games at home and this is why they have the bigger chunk of the pie. New England is embarrassingly low and surpassing KC only because they have more games. We must also consider that KC's new stadium is much... cozier. Maybe New England should opt for an 18,000 seater. Maybe that way it can say that it's at least 60% full. Out west LA dominates the picture, and rightly so. Even they haven't completely filled the stadium every time. There have been 3 games below 100% but still above the 70% threshold. They have also played just as much as Chivas, Colorado and Dallas. Beckham brings it still. More star statistics next week. 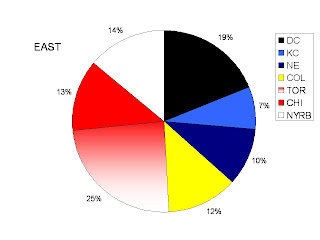 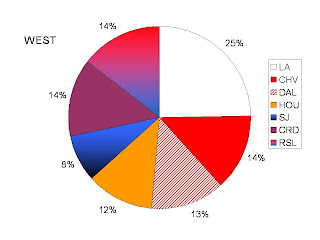