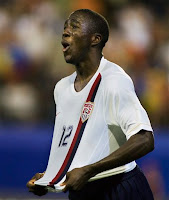 Multiple sources (Spanish papers, Washington Post's Steve Goff, New York red Bulls, ESPN's Ives Galarcep) are confirming the sale of up-and-coming MLS starlet Josimer "Jozy" Altidore to none other than Spanish La Liga giants Villareal. Villareal have just sold Martin Caceres to Barcelona for $16 million, thus enhancing their chances of landing the US international. The "Yellow Submarine" (as they like to call themselves) will then lend Jozy out to fellow La Liga side Recreativo de Huelva (they narrowly escaped relegation). This is also a good move for Jozy since he's bound to see more playing time for a lower tier team before he's ready for the big scene. Similar transactions have occurred in the past between these two teams. Such was the case with Ecuador's creative midfielder Antonio Valencia, who just recently helped Wigan Athletic of England escape relegation. Recreativo helped Valencia (who was also acquired first by Villareal) hoist himself to stardom and propelled him to the undisputed best soccer league in the world, the EPL.
Much has been said about Jozy's performance of late and his prospects for the future. I've seen a lot of criticism from the US soccer media (ESPN and FSC mainly) about how they've seen his commitments to the team diminish, about how he shouldn't let things get to his head (Adu style), and that his days may be numbered. Rubbish, I say.
First, Adu is a wonderful player. I would rank him up there with Dempsey and Bradley and McBride. He has speed, intelligence and great skill with the ball. Sometimes he seems to be a play ahead of his teammates and this may be causing some of the problems that critics have consistently voiced. Such was the case in last week's friendly against England. Hopefully he will start against Spain and Argentina, especially considering the depleted midfield without the likes of Landon Donovan and the drop in performance from other players in that position (i.e. Ricardo Clark).
Second, there comes a time in a player's life where he must weigh the consequences of things such as fatigue and injury during his play if his future may lie in a more profitable market or even for national team play. I can't argue with taking it easy if you know a transfer is imminent. I admit that when i saw the kid play in a recent game against my local USL team (The Railhawks) he showed hints of brilliance but kept a small profile for the most part. then again, let's look at some numbers: last season he scored 7 goals for NYRB while also being away for the U-20 competition. 4 goals in the U-20s. This season, with 9 matches so far he has 3 goals (Juan Pablo Angel, with 19 goals last season, hasn't fared well either and NYRB isn't exactly lighting it up this season anyhow). Jozy also scored in February's 2-2 match against always-tough Mexico in Houston.
Transfer for this kid has been pending ever since his performance at the U-20s. He attracted interest from Chelsea, Real Madrid, Barcelona, Manchester United, among others. Reading FC (recently relegated to the Coca Cola Championship) had offered $8 million in December but MLS turned the offer down. They've been asking for $10 million, which also happens to be the largest figure ever for an MLS player (Dempsey went to Fulham for $4 million). Clearly, this major European power sees great future in this youngster and has offered $8 million plus further considerations that bring the total to $10 million.
Jozy Forecast: Becomes a regular starter for Recreativo by mid season, 9 goals. Gets sold to a mid-table team in the EPL, i.e. Portsmouth, Man City, etc by the start of the 2009-2010 season. Becomes a permanent starter for the US national team this fall and starts at the 2010 World Cup.
Posted by R. Mera Velásquez at 1:09 PM

Jozy is my second favorite starlet, after Kirsten Dunst.