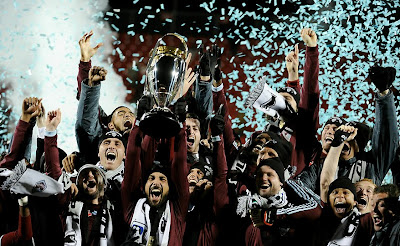 The Colorado Rapids won the MLS Cup final yesterday versus arguably the best team in MLS--FC Dallas. It was a fitting finale, perhaps for a team that I grew to appreciate during my brief time in the Denver-Boulder area. From a practice match against a college team that was canceled due to inclement weather to the first competitive MLS match I ever attended. Truthfully, even at the beginning of the season, I never thought the team would make it this far...even less to actually win it. But that's how soccer works.

The match started as we thought it would: FC Dallas dominated and David Ferreira scored. Hyndmann fielded the same team that ran over the LA Galaxy. Another Dallas rout of their opponent? Not quite. Rapids coach Gary Smith continued his game plan and the team quickly moved to shut down the Colombian ace (and league MVP) with Mastroeni and Larentowicz providing the pressure. Brek Shea, meanwhile, was null in this game, with Dax McCarty taking up most of the offensive efforts.

For the Rapids, it was a team effort. Conor Casey showed why he's considered a resilient force and an underrated attacker (probably a better option for the US than Robbie Findley at the World Cup). Omar Cummings provided an important second striker, making the Rapids' front one of the best tandems in MLS. But it was Casey's unwavering fight for a goal that eventually brought the scoreboard level. In a play where Dallas' defense was frozen and in which Hartman and a defender ended up on the ground, was where Casey (also laying horizontal) struck home the equalizer. Typical Casey fashion. It reminded me of the tying goal versus Honduras in the match played by the US against the Catrachos that eventually wound up a victory and sealed the US' passports for South Africa.

The game took a downturn after the tying goal. Too much defense and not enough inventiveness from either team. The game ended up going into overtime and the Rapids grew even more dangerous. Yes, Dallas had more opportunities, but you have to put them away in order to win a game.

It would be Kandji in the 107th minute, after replacing an inured Cummings, that would put the Colorado team ahead on the scoreboard. It was a freak shot that bounced off George John's thigh, past an incredulous Hartman, almost in slow motion, into the net. Kandji would actually leave the game injured after this play and the Rapids were down to 10 men.

Dallas incessantly attacked but was thwarted every time by a stout defense and excellent goalkeeping by Pickens. After 2 or 3 clear chances, the referee blew the whistle and a new champion was crowned: the Colorado Rapids. An original MLS team with hard working individuals and lacking a Designated Player or colorful coach. Attendance in their stadium is mediocre at best, but they've sent a clear message that they are a relevant team ready to win more fans, more tournaments, and the heart of American soccer.