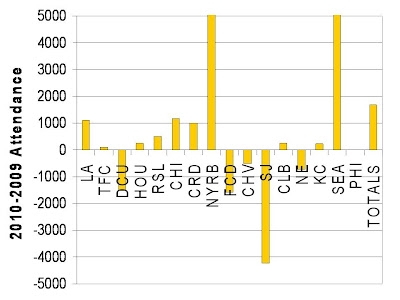 It seems only fitting that I should do the last week's attendance figures as the first part of the MLS playoffs draws to a close. Why? It just seems that 3 of the teams with the lowest attendance could win the cup and will be hosting the semifinal: Colorado Rapids (13329), San Jose Earthquakes (9877) and FC Dallas (10874). Only New England (13018) and Kansas City (10286) have lower numbers than the Rapids.

With that said, we turn to another statistic: change from 2009. Both San Jose (-3836) and Dallas (-1567) saw declining attendance compared to last year. Indeed, San Jose saw the biggest loss by any team in the league. The Rapids saw a modest gain of +998.

Let's keep this in perspective, however. With the two highest-attended teams yet to play, Seattle (36500) and LA (21571), the spectacle on ESPN tonight will have a nice backdrop. Indeed, this season saw a significant increase in attendance overall when compared to 2009 (+1678). This is partly due to increasing availability of seats for Seattle (+5603 overall) and the major gains by New York (+5889) after opening the Red Bull Arena and adding Marquez and Henry.

How will next season compare? Given possibly sellout crowds for Vancouver and Portland, as well as strong attendance in Philadelphia, Toronto, LA, Salt Lake and Chicago, we could see the figure go up even more, perhaps by another 1000. And if the on-field success by Dallas, San Jose and Colorado can reignite attendance in those cities, MLS can look even stronger in the world scene.
Posted by R. Mera Velásquez at 1:58 PM