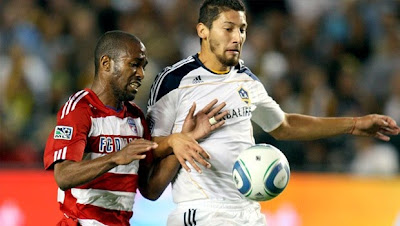 FC Dallas was victorious this evening at the Home Depot Center, cradle of the LA Galaxy and stadium that ranked second-highest in attendance. Hyndman's men did it in style. Gritty defense. Outstanding 'keeping by Kevin Hartman, often underrated, clearly overlooked by the national team.

The star today? Hartman +10. The team played as one. It defended as one, it created as one and it attacked as one. Some of us out there had called Atiba Harris' lone start up top a risky maneuver not likely to pay off. I jokingly said it could be a genius move. And it was. More so because it allowed for the counter as Ferreira, McCarty and Shea pushed up as soon as there was a free ball. Ferreira iced the game midway through the first half. John scored again for Dallas early in the second half before Chavez sealed the 3-0 win in the 73rd. Hartman saved at least 4 sure goal attempts.

No Beckham and no Donovan in the final. Instead we have two "long shot" teams: Colorado Rapids and FC Dallas. Little did I know when I went to the Rapids' home-opener in April that this would be the team to beat in November. MLS clearly doesn't need designated players to win the cup. And yes, I'm stressing the cup. Because in reality, LA won the league and Real Salt Lake were the runners-up. This would be the case in most of Europe and some South American leagues. Here, the Supporters Shield (awarded to the highest points) is clearly shunned as a secondary title.

One last point: these two teams represent some of the lowest-attended of all squads in this league. Rapids' 2009 average was 13,328, whilst for Dallas it was 10,815. Only San Jose and Kansas City had lower numbers, and that's because their stadiums hold less than 10,500 to begin with. Will reaching the final bring up attendance numbers? It did for Columbus, to some extent. Is a designated player necessary? Not really. Not unless you know how to slide one in without upsetting the environment: Schellotto, Giovanni worked well. For Dallas it may be appropriate to get an interesting name and excite the soccer-loving crowds in the state.

This will be an interesting, fitting finale for a season full of surprises: from the rise of Buddle to the late charge in scoring by Wondolowski. From the return of Beckham to the arrival of Henry and Marquez. From the entrance of Philadelphia to the sellout crowds at Qwest Field. From the impressive Hans Backe (New York) to the outstanding Hyndman.

photo credit: MLS
Posted by R. Mera Velásquez at 12:11 AM