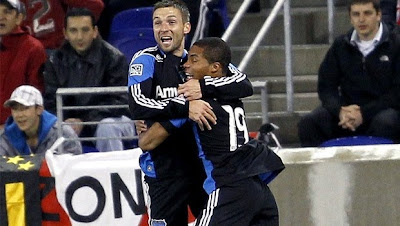 It was truly a tale of two matches. On the away match, the overbearing New York Red Bulls stomped all over the San Jose Earthquakes at Buck Shaw Stadium in the first leg of the quarterfinals in MLS' convoluted playoff system. The scoreline was 1-0. Many out there, including myself, thought the Red Bulls should come home with the away advantage and score a routine win or a tie to see them through. We were wrong.

Enter Bobby Convey (remember him?). His goal in the 6th opened up spaces in the defense as Rafa Marquez kept moving forward. Tim Ream and company were leaving too many spaces open after that in a push for the equalizer. Chances came and went via Agudelo, Richards, Lindpere and Angel. None got through thanks, in part, to John Busch.

With the first half behind and an ever-more-dangerous New York pushing farther up San Jose's defense, more room was left in the back line for the Red Bulls. Convey punished them for this with his second strike of the night. Immediately after, however, a smart play by the 17-year-old Agudelo set up a free header for Angel. 2-1. It's a game again.

Then came Wondolowski, the league's top scorer, with a superb header. 3-1 was the final score.

What do we take away from this result? Big spending doesn't necessarily mean success, and this is not a "Tea Party" remark, let's stick to football. Consider this: New York had 3 designated players on the pitch: Rafa Marquez, Thierry Henry and Juan Pablo Angel. Together they are worth three MLS teams, so to speak. Henry was a commodity. Angel was a proven scorer. Marquez was a brilliant move...but Henry and Marquez came in too late in the season (August). Not enough time to transition into MLS play.

San Jose went in the other direction. They signed a designated player late in the season also (Giovanni), but it wasn't their centerpiece. They were smart about spending and about having a blue-collar team that can do some damage. They snuck into the playoffs and are now semifinalists. Players like Wondolowski (27-year-old veteran of MLS), repatriated Convey (his time in Europe was cut short due to form), Corrales, and a hard working team. That's worth more in MLS right now when two or three year projects are allowed to proceed. New York went the opposite direction. New manager, pricey players, big team attitude.

But New York isn't completely flawed. This can be a team to reckon with in the coming seasons if Hans Backe is allowed to remain at the helm and if a more skillful playmaker is signed. Add to this the promising 17-year-old Agudelo, Richards, Lindpere, Tim Ream, and this adds up to a successful franchise.

So cheer up, New York. There's always next season. And to San Jose, welcome back to the big leagues.u