Youngsters 2010: US vs South Africa 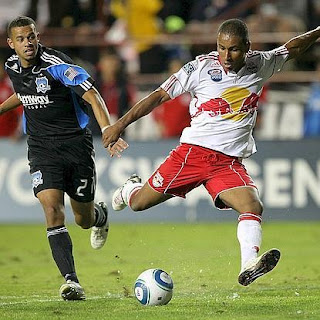 The US national team will revisit South Africa next week for a friendly versus the host nation. This has been a place of providence for our national team: building the future from the 2009 Confederations Cup to the 2010 World Cup. And next week's game offers an even better look at the future of the sport in this nation.
With stars like Steve Cherundolo, Carlos Bocanegra, DaMarcus Beasley, Herculez Gomez, Brian Ching slowly ceding space for a new generation, it becomes rather urgent to analyze future options. It should also be noted that megastars Donovan, Howard, Dempsey, Onyewu, Jones and Feilhaber are nearing their "veteran" status. That is, they will be in their 30s by the time 2014 comes around. Our "mature" players (mid to late 20s) will include Holden, Bradley, Edu, Torres, Altidore, Spector, Lichaj, Bornstein, Guzan. So, who do we watch out for? Starting with the defense: Tim Ream is a potential future starter with the nats. He is in the same boat as Bocanegra, Goodson, Onyewu, Omar Gonzales. Along with Gonzales, he could solidify the back four for years to come once the older guys retire. Agbossoumonde is one to watch also. He's in Portugal now trying to break into the Sporting Braga first team. I'd also like to see more of Lichaj. He made his EPL debut in Aston Villa's latest game and has played in Cup competition.

In the midfield, all eyes will be on Diskerud, if he plays. He's a starter with Norwegian side Stabaek (7 goals in 47 games). Look for Bedoya, Roggers, Gaven and Pause/Carroll to get the start, as they are more experienced players.

Possibly even more important are the new attacking options. I'm still not sure why Jack McInierney wasn't called but I'm sure there is a reason for it. Aside from that, I think Juan Agudelo could be the most promising of the bunch if we're talking goals. He impressed (although did not score) during the two games he had as a starter for the New York Red Bulls in the MLS playoffs. He was quite the prolific scorer in the youth squads (12 goals / 17 games for U-17, 3 goals / 7 games for U-20). If this sounds familiar it's because there was once another promising young star in New York: Jozy Altidore. Agudelo is quite fast, has excellent dribble and awareness, and is full of energy. An Altidore-Agudelo tandem in the future is always a possibility. But let's see how well he develops.

Bunbury is another interesting option at midfielder/forward. He had 25 appearances as a rookie for Kansas City and scored 5 goals. He's the son of prolific goal scorer Alex Bunbury (Canada) who played his trade in Portugal before joining MLS. Teal is Canadian-American but has chosen America (as of right now). A rising star? There's always room for more forwards.

So there you have it, folks. Youth or inexperience? Gutsy call by Bradley? Given the busy schedules with the usual starters, I think this is a great opportunity for the youngsters. I don't anticipate a blowout, but even if it is, it's more constructive to analyze the new options in the American pool.
Posted by R. Mera Velásquez at 3:05 PM