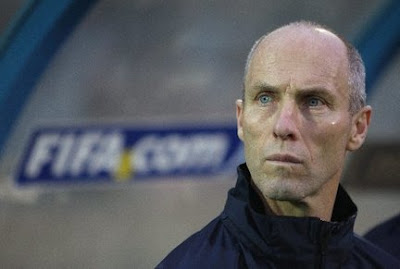 If the title sounds like a cheap sequel or, perhaps, a masterful reintroduction of a superhero, then Bob Bradley's rehiring by US Soccer fits right in. Yes, it's true that Bradley led Team USA to a 38-20-8 record which included a first place finish in their group at this summer's World Cup in South Africa and second place in 2009's Confederations Cup. But is it worth the risk to continue with the same tactics that allowed for porous defense at the World Cup?

Just like in 2006, a name that emerged as a possibility for head coach was former Germany international and head coach Juergen Klinsmann. And just like it happened in 2006, nothing ever came from rumored "meetings" he had with US Soccer. Would he have been a better option?

It may not all be Bradley's fault when it comes to glaring errors in the USA lineup. Jozy is more of a number 11 than a number 9 (i.e. Davies), so goals from the forwards are hard to come by. The porous defense is likely a combination of factors: recovering Onyewu, aging Bocanegra and DeMerrit, struggling Ricardo Clark. But clearly, Bradley's scheme has also failed to yield positive consequences in this part of the field (i.e. early goals by opposing teams).

Finally, there is the complacency that comes along with retaining a coach for a second world cup cycle. Other teams may adapt to Bradley's style and choice of players. The team itself may be in need of new ideas to motivate them to evolve into a stronger unit. Sven-Goran Eriksson did nothing different for England in 2006 than he did in 2002. Same result: exit in the quarterfinals. Bruce Arena had few breakthrough ideas in 2006 and it turned into a disaster. Is the USA doomed to a 3-and-out in 2014? Not yet. Let's give Bradley some credit.

Bob Bradley is a masterful tactician when it comes to big opponents: England, Brazil, Spain. Better game management is required to defeat the likes of Ghana, Mexico, Czech Republic and even Slovenia. This is where World Cups are successful. Winning the key matches and standing up to legendary teams. If Bradley can muster up new tactics and introduce a better defense, then yes, he should retain his job. Can it be done? Only time will tell, and we hope this decision by US Soccer will not develop into another 4-year flop. Cheers, Bob. Good luck. We are behind you as our Team USA coach.

A coach can only do so much and we have very little depth on our national team. Further player development in the United States is just as important as tactics in taking our program from where it is now to the very top. It is easy to blame the coach when expectations (for some) were higher than a round of 16 exit. Bradley is obviously not perfect, but we do him a disservice to ignore the good things he has done the last four years.