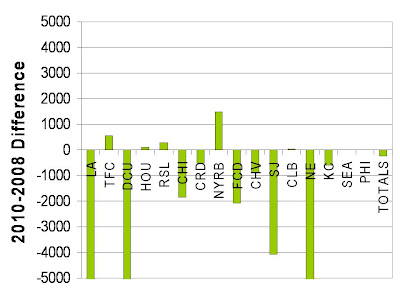 Apologies for mislabeling 2010 as 2009 attendance figures on previous posts. This should make it easier for people to find this site on search engines. This past week saw sold-out, overbooked BMO field for the TFC-NYRB tilt and 18K+ at Houston to view Nery Castillo and the Chicago Fire do battle with the Dynamo.

How has attendance changed since 2008 (full season of Beckham)? A closer look in the above image shows significant decline in most markets except for modest gains in New York. The biggest markets (New England, LA and DC) have seen large losses (>5000). Also, the season totals have seen a small decline, partially ameliorated by the entrance of Seattle and Philadelphia. For the rest, there is little chance and time to recover during the present season. Will things change next season?
Posted by R. Mera Velásquez at 11:47 AM