Adu: Is Freddy ready for MLS? 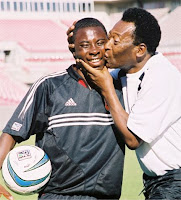 Is Freddy Adu good enough for Europe? Could the once-prodigy USA star be headed back home? After failing to impress at Portuguese giant, Benfica, in 2007, the Ghana-born midfielder/forward was loaned out for two consecutive seasons and three different clubs. Not the best case scenario for the "next Pele." Was it too much hype too early in his career? Did he try to leave home too early? It's likely we won't know the answers to these questions any time soon. We can, however, make some educated guesses about his future and perhaps analyze his stunted growth as a player.
Adu was born in Tema, Ghana, before emigrating to the United States when he was just eight years old. He became a citizen in 2003. Oddly enough, this was the same year he signed a contract with MLS and became available for the US national team. Adu opted to play for DCU at the age of 14 and MLS began its trial of experiments to capture American audiences; one that ultimately culminated in the signing of David Beckham and the advent of the Designated Player rule.

Should he have joined the league so young? We will never know. Piotr Nowak was always apprehensive about using him in his lineup, even if team and league officials as well as myriad sponsors clamored for the teenager to be on the pitch. Even Pele wasn't officially a player until the age of 16.

Adu was traded to Real Salt Lake in a move that I feel recognized the youngster's shortcomings as a player. If he had remained a star, DC would never have cut ties with him. Adu impressed as a US international, however, and a good showing at the 2007 U-20 World Cup (with Altidore, incidentally) catapulted him to Benfica of Portugal for a $2 million fee. There was little playing time, however (11 appearances) and he managed to score just twice. Loans to Monaco (2008-2009), Belenenses (2009) and Aris of Greece (2010) also failed to grant him playing time, although the latter did offer more chances and scoring opportunities.

I admit that by the end of the 2010 season, things were starting to click for Adu. His mood was right, the playing time was there, he was scoring and the fans were behind him. Not enough for South Africa. Not with the likes of Holden, Feilhaber, Torres, slightly higher in the pecking order. We have to attribute this to consistent lack of playing time for at least 3 years (a whole World Cup cycle). Europe was clearly not the best option for it.

Now comes word that Swiss club Sion has passed on the American and Adu is left without a team and under contract at Benfica. Will the club waive him? Where will Adu turn next? Another European club ready to take a gamble on an unfinished product? Could Freddy come back to MLS?

There was another youngster that impressed with the national team youth and senior system: Landon Donovan. Yes, the Galaxy man started his career with Bayer Leverkusen of the German Bundesliga. After just 7 games with the German team, it was clear that Donovan was not ready for Europe. He returned triumphantly to MLS and won the domestic tournament with San Jose and the Galaxy. Flash-forward 8 years later and Donovan is synonimous with US soccer and the general media in the US. It is possibly a fate that Adu could mirror, were he to return to the United States and rekindle his football.

Many American soccer critics [see Fox Soccer, ESPN Soccernet, etc.] are adamant about Adu being one of the best prospects US soccer has to offer. He just needs some stabilization, they argue. 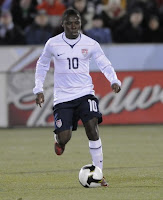 USA is in dire need of a true #10 that can pick up where Donovan leaves off (assuming Donovan will still play in 2014). It happened with Reyna before when Donovan took the job. Adu is a playmaker that can score. He is also not afraid to run at defenses instead of speeding around them (like Donovan). A few years of solid MLS first-team action may just do the trick.

We here at the FutbolUSA desk wish the best for this 21-year old. It brought attention back to the league in 2004. We are all older and wiser about the game nowadays. It's time to play at home, to play with the best of this country, to build a better team USA. We are waiting for you, Freddy. We are ready.
Posted by R. Mera Velásquez at 9:18 AM

You've got me convinced, I am booking his flight back to the US right now.

The guy needs to PLAY, period. He could do well in the Danish league, where a few Americans are already playing. But MLS gets him back into the American conscience after a very humbling few years adrift.