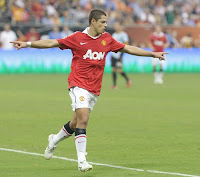 Let's face it. Jozy Altidore isn't the complete answer to the dearth of goals in Team USA's front line. Jozy is a strong, dominant player that creates chances and intimidates the opposing defense. But he doesn't score. Not as much as would be required from a prototypical #9. Further evidence for this is his performance abroad: 1 league goal for Hull City and 1 for Villareal in two years of play. Jozy has been switched to a more standard #11.

You could make a case for Charlie Davies as a #9, but his flame was put out just as he was starting to shine. Landon Donovan isn't the prototypical striker either. He works much more as a creative force and scores vital goals (3 in the 2010 World Cup). This brings us to another point: all the goals in South Africa were scored by midfielders: Dempsey, Donovan, Bradley.

Older, in-form players like Herculez Gomez and Edson Buddle did little at the World Cup, partly because their use was limited by the tactics of the game. Robbie Findley has also failed to convince. So there you have it: no sole striker. No accompaniment for Jozy.

If we look south of the border, things look gloomier for the US. Mexico has a formidable weapon in Javier "el Chicharito" Hernandez and the quiet ascent of Carlos Vela. Hernandez plays for non other than Manchester United while Vela suits up for Arsenal. Impressive stuff. Hernandez scores for Mexico basically every other game. He finds the net easily and is always in the right spot. We can't say the same for any US player except for Donovan.

Another important point is the fact that Hernandez is fairly young (22). Altidore is younger (20) but isn't as productive. This blog post is echoed all across the US soccer media, including MLS itself. There are a couple of new hopes in the horizon: Agudelo, Luis Gil, Jack McInerney. I'm following McInerney intently after seeing him in the U-17 tournament. The kid has spirit and scoring ability. He netted twice for Philadelphia Union this season in an impressive manner. He isn't yet a starter but we are seeing him develop into that fairly quickly. Then there is teammate Danny Mwanga. Mwanga is a DR Congo national but is not yet a citizen. He has scored 7 times in 18 games for the expansion side Union.

Until prospects like McInerney and Mwanga take the field wearing a USA jersey and score frequently, it is safe to assume that USA will be limited in its scoring opportunities. The USA needs a Chicharito. They need one before the Gold Cup next summer and World Cup qualifiers in 2012.
Posted by R. Mera Velásquez at 5:57 PM

Man United, however, does not (at least so far) seem to need a Chicharito with the infrequency they are playing him. Maybe he was signed to light a fire under Berbatov's ass. If so, mission accomplished thus far.

Very true. He is likely to be loaned out. Best of luck to him, personally. For the USA, it might be better if he doesn't score as frequently.

He scored on Valencia in the Champions League.