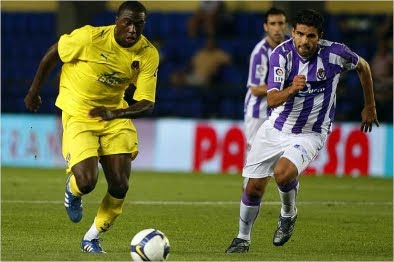 As I watched the LA Galaxy and the New York Red Bulls battle it out on Friday night, I caught an interesting conversation between two former USA teammates: Alexi Lalas and John Harkes. I've been quite critical of Lalas in the past for his choice of remarks as a color commentator on ESPN soccer broadcasts. Harkes is a bit more subdued but his words of wisdom do carry some weight. The conversation was about Designated Players in MLS (Beckham, Henry, Marquez, etc.) and it also touched on another factor: American talent.

Being four days removed from this conversation, I'm not entirely sure who actually suggested that we should bring back players like Altidore to the US to play in MLS instead of spending money on overage dwindling stars (Beckham) or struggling maestros (Castillo). Is this really true? Should MLS halt player development this way?

Lalas himself is a proponent of big teams with big names. He loves superclubs and he's excited to have names like Beckham playing against Marquez and Angel. The suggestion to bring home our top players is unsustainable at this point. As we saw this summer, playing abroad is a significant factor in determining the quality on the pitch at the World Cup. Even Mexico, a team with great tradition in its domestic league, relied heavily on Europe-based players (Dos Santos, Vela, Hernandez, Salcido, Marquez, and so on). Why should the US be any different?

There is, however, a flip side to this rationale. For example, players like Bobby Convey--still in his prim--chose to play in MLS once again. His form had been declining in England and his team (Reading) had begun to phase him out. This predicament has also befallen to Freddy Adu and Oguchi Onyewu. I made a case for Adu's return in a previous post. I stand by it. Adu hasn't made a difference in Europe and even less with the national team. The same cannot be said about Altidore. He may not be putting away his chances, but he's creating dangerous plays and possessing the ball better. Altidore was also a major factor in two World Cup goals: assists on Bradley's tying goal versus Slovenia and Donovan's rebound against Algeria.

We have plenty of exciting American youngsters in MLS: McInerney, Pontius, Ream, Gonzalez. As long as the NCAA system keeps developing players, we will have plenty to go around that will not make the jump to Europe. So, to the commentators: no, we shouldn't bring back Altidore, Johnson, Davies. Not yet.
Posted by R. Mera Velásquez at 3:35 PM