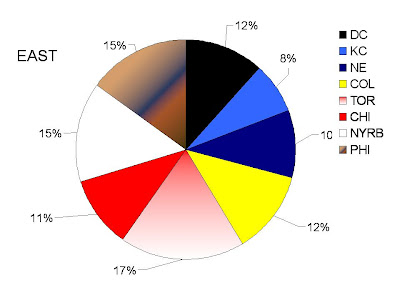 The action in MLS continues despite NFL and College Football. Indeed, the bigger markets (LA, NY, Seattle) continue to have strong attendance. It may be safe to say that the dedicated fans are here to stay, at least in these markets. New England and Dallas have a long way to go. A possible switch of Chivas USA to another market might also shake things up. How about Miami? With New York likely to get another team, it would only be fair to grant the US capital of Latin America its own MLS franchise.

Increased attendance in New York notwithstanding, Toronto's steady numbers (~20500) are highlighted in the pie graph. They hold the larger porportion of attendance compared to the rest of the Eastern Conference. A proposed 30,000 seat stadium expansion may not be a bad idea. Also worth noting is the price of tickets at this venue: $90.78 compared to $79 at Manchester United. Wow. Whether true or not, it should raise a few eyebrows. Maybe TFC can start winning cups for a change?
Posted by R. Mera Velásquez at 1:07 AM