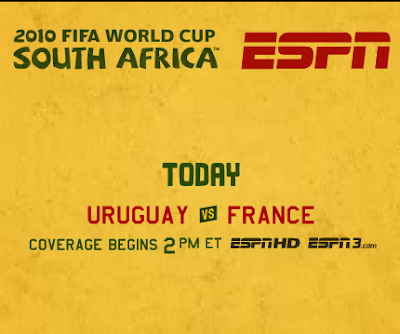 Admit it. If you like soccer in this country you are limited to what ESPN has to offer (1 semi-weekly MLS game and an EPL game on Saturday mornings). That's with basic cable. Otherwise it's airwaves, and you better hope your MLS team is local or you like the Mexican league. That is, as long as either Telemundo or Univision/Telefutura are available. Granted, select Concacaf Champions League games are also available on Telefutura, mostly when Mexican teams are involved. There are also sporadic Uefa Champions League games on the Fox Sports Network.

But what about the national team? USA usually plays on ESPN for the qualifiers and international friendlies. You can also catch the Mexican national team if it's a friendly on Telemundo (they hold the rights to games abroad). Univsion usually carries the Mexico-USA qualifier clash. The only other time is during the World Cup. Euro games are also shown on ESPN networks (and occasionally on ABC). Univision has rights to the Gold Cup and Copa America.

So if you want to view European soccer beyond the one Saturday morning Premier League match, then you have to spend some money to get digital cable or satellite TV. Usually, at least for cable, Fox Soccer Channel is included in the digital package. For Direct TV, depending on where you are, it may cost extra. Having FSC gives you at least 3 live EPL games and 1 or 2 Italian Serie A matches. More importantly, The UEFA Champions League is shown on this channel, along with MLS-participating Concacaf Champions League games. It also gives you their weekly MLS game along with select women's games (WPS) and NCAA (men's and women's). That's enough to keep some, if not most, satisfied.

If one wants to venture out past FSC, then you better hope your region includes ESPN Deportes as a standard channel (New York, LA possibly?). Otherwise it will cost you extra. For Time Warner it comes at $3 per month. It may be more with other cable companies (Comcast may be up to $15 per month). Included in this channel are German Bundesliga, Dutch Eridivisie and Spanish Primera. This usually means you are getting the "Latino" package. Fortunately for you, choosing this option also gives you access to two additional networks: GoalTV and Fox Sports en Espanol. With GolTV there is more Spanish Primera, as well as Brazilian and Colombian football. Select World Cup qualifiers will also play in this channel as well as on ESPN Deportes. FSE provides access to the Copa Libertadores, Copa Sudamericana, and complementary UCL games.

One additional network is the recent addition Fox Soccer Plus. Not in cable companies in most markets but it is included in the sports package with Direct TV.

We now arrive at the internet. Fortunately for some of us that dwell in academia, .edu domains give access to espn3.com. There you can catch pretty much all the action on the ESPN networks. It is also available for Comcast customers. Such is the case in Oregon. But what about Fox? Well, if you're like myself (and many others), then watching the Champions League (UEFA) requires an investment. But don't fret yet. There is always streaming (often unreliable peer-to-peer) video. Until Fox chooses to follow espn3, most internet-savvy soccer fans will access it through other means. It's silly, really. If they keep advertisements going within an online. portal it will only give Fox Soccer more attention throughout America.

Hopefully this summary will help some folks out. I will not give away streaming video addresses through here but you can always search for them or follow online threads. Enjoy soccer, America. Plenty of it if you know where to look.
Posted by R. Mera Velásquez at 2:54 PM

Direct TV and Fox Sports World have gotten me into the Premier League in a major way. I wake up way to early to watch the games on the weekend. Sometimes I even miss my fantasy football drafts as I am too engrossed in a match.

Wish I could say the same. I downgraded out of ESPN Deportes, FSE and GolTV... however, I got comcast so I can watch all the games that are on espn3.

I used ESPN3 for the first time the other weekend when my satellite box died, it was a life-saver.