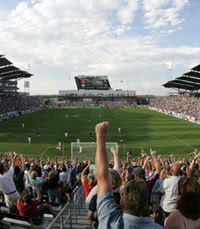 Today's match between the Colorado Rapids and the Chicago Fire was my first experience at a competitive MLS match. I am a soccer fan. It runs in my blood and exhilarates me to watch. When I have a chance to experience the game live it is that much more special. Perhaps this is because I've been relatively deprived of high-level futbol throughout my adult life. As a kid born in Ecuador and having stayed there until the 6th grade, it was difficult to find a steady futbol mentor. Living in New Orleans and then North Carolina the rest of my life limited me to NASL and USL action only. A handful of Barcelona(EC)-Emelec clasicos, a US World Cup Qualifier and interspersed MLS-USL preseason action account for my experience of the game at actual stadiums.

To start, I'd like to compliment the team on a superb field and impeccable stadium (Dick's Sporting Goods Park). The pitch looked amazing and could be described as a soft green carpet. The seats were comfortable, close to the field and spacious. The new "Supporters Terrace" adds a bit of European flair to the fan base. My colleague (and ticket buyer) is a footy fan and a former River Rats fan club member. It was a joy to cheer along with her as well as my significant other and other company in attendance.

The stadium was a good 63% full today. Not optimum but decent and it sure felt like a packed house on my side of the stands. The opposite end had more empty seats. It's also nice to note the game's very much a family sport in this nation. I was reminded of this when I saw two girls (7 or 8) sitting together watching the game... one with a yellow jersey with the name "Brazil" above the number 10 and the other with a mini Manchester United jersey and Rooney's name. 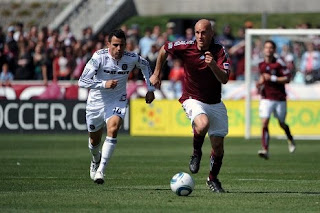 The game for me, as always, was also much more about the players. I followed Conor Casey intently for most of the match as well as Marvell Wynne. Casey was often dangerous but with limited service from midfield. A stronger number 10 is needed and the incoming Claudio Lopez may just do the trick. I can see Casey's name being included in South Africa if Ching is unable to make it due to his recent injury. Casey is a good target forward (just watch the US-Honduras game from last October) and he can dribble with style. Wynne also showed his class--and his flaw. Poor decisions when pushed to the limit (his foul on Nyarko produced Chicago's equalizer). Excellent marking when needed. He was the reference point for the Rapids' defense and saved his team on 5 or 6 occasions.

Today's game left me wanting more. My stay in the Denver area is about to expire and this was the only match I could attend. I'm looking forward to next season, however, since my future home will be the state of Oregon. They will have a new expansion team, the Portland Timbers, and I plan to attend many more games. Indeed, it will be a pleasure (and relief) to finally have a home side to root for.
Posted by R. Mera Velásquez at 12:37 AM

Glad you got to get out there bud, sounds like a good time. I wish they would put a team within eight hundred miles of me.