The Special One returns: Inter vs Barcelona 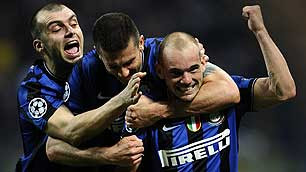 Who would have thought it, right? Inter 3 - Barcelona 1. The Special One (Joze Mourinho) did. Remember that he was once assistant coach to Pep Guardiola. Also remember that he's a masterful tactician. Milito's strength, along with Eto'o's explosiveness add depth to Snejider's play. Throw in Lucio, Julio Cesar, Zanetti and company and you have a team capable that may just de-throne the unbeatable Barca. Winning the Champions League would only further cement Mourinho's legacy, especially knowing that he's about to leave Italy (Real Madrid, we're looking in your direction).

Messi was quiet today. Inter's midfiled was able to pull that off. There was plenty of attack left but Iniesta's absence could have influenced the outcome of the match. Sure, Milito was offsides in the second goal. But who cares? Now we have a do-or-die game in Barcelona next week.

Oh, and before I quit... did you notice how many Italians were on the starting team for Inter? Answer: zero. Sure Baloteli came on in the second half... but he's only Italian by choice. At least Barca had Valdes, Xavi, Puyol, Pique, Pedrito and Busquets.