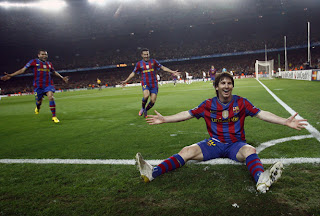 Messi 4 - Arsenal 1. I saw three out of four goals using just the internet, but it was enough to capture his magic.

It suffices to say that the world press has united behind calling Lionel Messi the best player of his generation... indeed of this quarter of a century. Sure, there's Zidane, Ronaldo, Romario, Cristiano Ronaldo, Baggio, Rooney... but do they make a difference week in and week out, consistently and with goals and build of play? Reminds us of Maradona? Maybe, but Messi scores more goals... at least with his club. Maradona had a 0.37 goals/match with the national team, Messi's ratio is 0.30. His touch is magic, his presence unpredictable, his passes millimetric, his finishing unmatched. Perhaps 2010 is the year he becomes a legend with Argentina. Now all he needs is a team that can support him... can Diego pull it off?

In case you missed it: