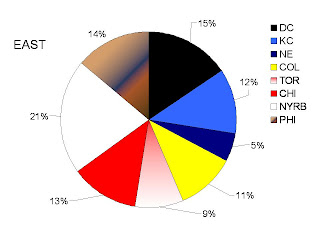 A quick update on Week 5 attendance. Yes, numbers were lower this week. Why, you ask? People failed to show up to New York's best new stadium--Red Bull Arena. Only 64% full. And Chicago? Well, let's just say a bit more than half as much as opening day. More of the same for Dallas, and, inexplicably, on national television. Not a good way to get casual fans to watch the game. Colorado is also meandering around the half-full mark. Too bad, my experience at the stadium was such a treat. Also, take into account no DC, TFC, Seattle or Philly to boost final numbers. 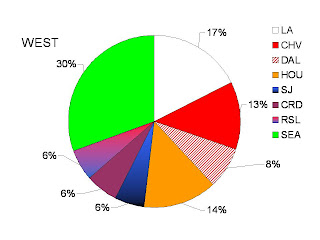 Another way to look at this is a partial view of total attendance for each team relative to one another for each conference. Not much can be said at this point since some teams have only played once. Still, New York, DC, Seattle and LA all show strong numbers.
Posted by R. Mera Velásquez at 6:54 PM