Algeria is more of a history lesson for me, as well as a way to prepare for what they could mean for the US national team. The Desert Foxes were in two World Cups (1982, 1986) during their golden age. I admit to having little to no memory of their time in Mexico '86. As always as a child I rooted for the underdogs, and something tells me I was probably going for them too. 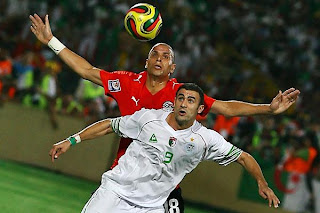 Algeria's play impressed in 1982. They defeated West Germany in a shock match. It followed that Austria and Germany needed a specific result (a 1-2 goal win by the Germans) to see them both through. This was in the days that wins counted for only two points and when final group matches were held at different times (today all final group matches are simultaneous). The Germanic countries ended with their preferred result and Algeria left the tournament.

In Mexico, Algeria didn't have as much luck and was able to get only a draw against Northern Ireland. Spain and Brazil were too much. The Desert Foxes haven't made it to a World Cup since then. But wait, isn't Zidane's family from Algeria? Oh, current French superstar, Karim Benzema is also an Algerian decscendant... Coincidence? It comes down to the reach of the French Empire, no? But that's politics and I'm not brave enough for it. 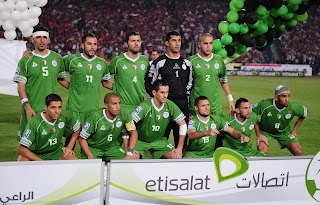 What's ahead? Slovenia (knocked out mighty Russia), England (always favorites), and the wild card, USA. If there's anything to say about the foxes is their resilience... they knocked out African champions Egypt after a heated home-and-away playoff that wound up tied and later settled at a neutral site--Sudan (not to mention the violence and hatred involved). Expect them to battle for second place in this very level field if we don't count England. This group is wide open, especially if Bradley's bunch pulls out another 1998/2006. Some stars to watch out for include Bougherra (Rangers), Belhadj (Portsmouth), Mansouri (Lorient), Matmour (Moenchengladbach), Ziani (Wolfsburg), Djebbour (AEK).
Posted by R. Mera Velásquez at 1:45 PM