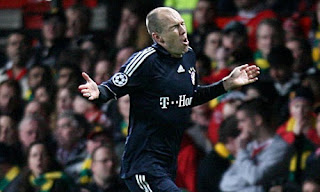 Today, Arjen Robben's clincher was more than just a thing of beauty. It also signifies a break from the domination of the English Premier League in Uefa's Champions League. Why is this so? Time for a change or a symptom of something more? Maybe a bit of both.

It is said that the top clubs reside in England and that this is where the top players earn their living... Really? I don't see Messi playing for Liverpool, Diego Milito lining up for Everton, Ribery starting for Chelsea, Cristiano Ronaldo scoring for Manchester United, David Villa scoring for Arsenal.

Is it too much competition within the EPL? You can argue for that. Spain is a two-horse race. Italy belongs to Inter, Bayern Munich still rules Germany, and Lyon, well, let's just say their place in football is nothing short of a monopoly in France.

You can make an argument for Rooney's injury and the loss of Ronaldo, even that Arsenal and Wenger would never get past Messi and the Justice League that is Barcelona. For whatever reason, it is now wide open. Four teams from four different countries... and none from England. Messi may have the upper hand, but The Special One and Milito + Sneijder, Robben-Ribery-Muller, Delgado-Toulalan may also have a say.

Sir Alex went all-in on Wednesday and for thirty minutes plus he looked like a genius. Unfortunately, Bayern had the cards in the end. Now Man U has no place in the champions league finals and a dwindling chance in the premier league with the additional damage Rooney seemed to suffer to his ankle during the match.